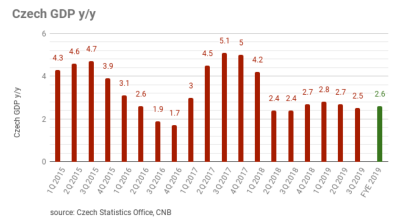 The Czech economic growth has slowed to 2.5% year-on-year and 0.3% quarter-on-quarter in 3Q19, most likely driven by household consumption, according to preliminary estimates released by the Czech Statistics Office (CSO) on November 14.

According to ING Chief Analyst Jakub Seidler, the growth slightly lagged behind the market and the Czech National Bank's expectations of 2.6% and 2.7%, respectively.

“Both the domestic and external demand contributed to the positive development. Favourable economic development continued in most of the economic activities of the Czech economy,” said CSO Head of the Quarterly Estimates Unit Jan Benedikt.

He added “that the highest contribution to the growth of the gross value added came from a group of economic activities of trade, transportation and storage, accommodation and food service activities, and information and communication.”

According to CSO, construction production remained successful, while growth dynamics of industry fell compared to 1H19.

“For the whole year, Czech economic growth should be around 2.5% after 3% in 2018. Although foreign risks seem to have moderated in recent weeks, they remain elevated. Some positive news is that the German economy avoided a technical recession in the third quarter, with modest q/q growth of 0.1%, while the market expected a slightly negative figure,” Seidler said.

He added that developments abroad will be crucial for the economic growth next year. “Right now, we expect the domestic economy to slow further to 2% in 2020, which is in line with the Ministry of Finance's forecast,” he stressed.

The Czech Ministry of Finance has just recently worsened its estimate of Czech economic growth to 2% next year in its new macroeconomic November forecast, down from 2.2% in its August forecast. This year economic growth should amount to 2.5%, the ministry predicted.

Also the Czech National Bank recently downgraded its economic growth estimate in its new forecast from November 7 to 2.4% for next year from the 2.9% it predicted in August. The bank left its estimate for 2019 at 2.6%. According to the Governor Jiri Rusnok, for 2021, the bank expects the economy to grow by 2.8%, while in August it estimated a growth of 3%.

The European Commission also lowered its estimate of Czech economic growth to 2.5% in 2019, mostly to be driven by domestic consumption. It predicts GDP growth will slow to 2.2% in 2020, down by three-tenths of a percentage point compared to its July forecast, and to 2.1% in 2021.