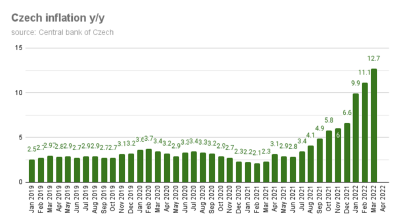 Czech inflation rate accelerated to its highest level since May 1998, up to 12.7% year-on-year in March from 11.1% recorded in February, the Czech Statistics Office (CSO) reported. The inflation growth was driven mainly by energy prices.

“This deviation was due significantly to all inflation components except taxes. A massive increase in fuel prices had the largest effect. Growth in food prices, administered prices and core inflation was also well above the forecast,” he added.

“Consumer prices increased by 12.7% in comparison with last March. The most significant acceleration of the price growth was observed for fuels, which were half as expensive in March than a year ago. E.g. petrol Natural 95 was sold on average for about CZK44.50 per litre at petrol stations and diesel for CZK47 per litre” noted Pavla Sediva, head of the Consumer Price Statistics Unit of CSO.

In month-on-month terms, consumer prices increased by 1.7%, mainly due to higher prices in transport and in housing, water, electricity, gas and other fuels.

“The exceptionally high increase in fuel prices in March was due to a marked rise in oil prices as a result of the outbreak of war in Ukraine and a temporary weakening of the koruna for the same reason. The war is also reflected in soaring food prices, as Ukraine is one of the world’s leading wheat exporters,” Kral commented.

According to the CNB’s winter forecast, inflation is expected to peak at around 10% in the 1H22 and return close to the 2% target in the 1H23. “However, the observed growth in commodity prices and the war in Ukraine are having a markedly inflationary effect on domestic price developments, especially in the short term,” Kral added.

Russia’s international reserves up $3.6bn in one week to $571bn
4 hours ago
CPI inflation in Moldova hits 33.6% y/y in July
17 hours ago
How do high gas prices push up the cost of power?
1 day ago
Russian inflation falls to 15.1% in July
1 day ago
Russia’s current account surplus hits new all-time high of $166bn
1 day ago