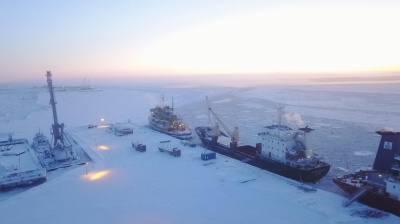 Chinese investors were involved in mega deals such as CNPC's purchase of a stake in Yamal LNG-2 (pictured).
By Clare Nuttall in Glasgow January 21, 2020

China emerged as the top investor in the Central and Eastern Europe (CEE) region in 2018 by deal volume, a new study by law firm CMS in co-operation with information platform EMIS revealed on January 21.

Chinese companies were responsible for a total of €6.4bn worth of M&A deals in the region in 2018, a 114% increase compared to 2017, putting it well ahead of the US and major European economies. 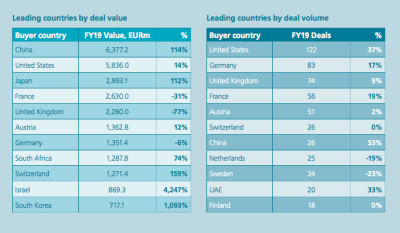 Many of the Chinese investments were mega deals, reflected in the number of Chinese investments being relatively low at 26, albeit up 53% year on year. “China was … involved in more deals than the previous year as its presence in the region steadily grows,” said the report.

Among the biggest deals signed off in the region in 2018, China National Petroleum Corp. (CNPC) bought a 20% stake in Russia’s Arctic LNG-2 project for €5.35bn.

Another major Chinese deal was Zijin Mining Group’s purchase of 56% of the lower zone of the Timok copper-gold project in Serbia for €234.8mn.

Meanwhile in Turkey, a consortium of Chinese firms bought a 51% stake in the Yavuz Sultan Selim Bridge and Northern Marmara Highway in a €621.7mn deal, and Industrial and Commercial Bank of China acquired Istanbul Tower 205 for €536.13mn.

But while China, which has been building up its presence in the region for years, was the leading investor, CEE also saw a hike in investment by firms from other East Asian countries such as Japan, South Korea and Singapore during 2018.

Japan was third ranked in terms of investment volume, at €2.893bn, up 112% y/y. South Korea accounted for a further €717mn, up a staggering 1,093% y/y, and Singaporean companies invested €604mn, up 601% y/y. Other countries such as Malaysia and the Philippines also contributed to the capital flow from South-East Asia into emerging Europe, said CMS.

“Investment from Asia seems to have diversified, both in terms of origination and assets acquired. Although not yet on a par with China or Japan, South Korean and Singapore investment is rapidly increasing, with investors from those countries particularly visible in commercial real estate deals. Investment from Asia now makes up one-sixth of total transaction value,” says the report.

Aside from the mega deals in oil and gas, mining and infrastructure, real estate and logistics has been an important recipient of Asian investment, with growing opportunities in the segment of logistics, warehouse, distribution and fulfilment centres that CMS says is “partly driven by underlying economic growth, but accelerated by e-commerce”.

“Asian capital has been very active in the logistics sector. Frontrunners from Asia include Singapore sovereign wealth fund GIC, which is the owner of Prague-based P3, and China Investment Corp., which bought Logicor in 2017. Many investors from South Korea have invested significant amounts of capital in various e-commerce and logistics projects across emerging Europe,” says the report.

It lists deals such as the €1.2bn purchase of the DCT Gdansk container terminal in Poland, by PSA International port group, owned by Temasek Holdings of Singapore, the Polish Development Fund and Australia’s IFM Global Infrastructure Fund. Also in Poland, Mapletree Investments of Singapore bought up the West Station office complex in Warsaw for €190mn.

“As a large and mature economy, Poland attracts a great deal of interest, but otherwise investment tends to follow sectors. Slovenia attracts investors because of its automotive industry, Bulgaria for fintech and Croatia for hospitality and hotels,” says the report, commenting on destinations for Asian money.

“We have received several enquiries about emerging Europe and interest in the region is picking up. This interest is quite well spread from sovereign wealth funds, private equity funds and corporates,” commented Irene Ng from CMS Austria.

The upturn in investment from Asia comes during a year in which the overall value and volume of M&A deals in the region were down year on year. In fact, M&A deal volume fell to its lowest level in a decade, with only 1,958 transactions on record, down 6.5% y/y, valued at €72.34bn, down 10.1% y/y.

Yet according to CMS many M&A professionals claim anecdotally that it was a more buoyant year than the previous one. There are also predictions that investment activity in emerging Europe will increase even further. “Looking at the five-year average, the region remains relatively stable and, if 2019 was not much more than a “rough” patch, as some market commentators have suggested, there is little reason for concern,” says CMS.

“Although deal numbers were a little lower, there is a lot of anecdotal evidence that it was a very busy year and it all points to the M&A market being very buoyant in 2020,” said Helen Rodwell, corporate partner in CEE at CMS.

CMS also reported a strong private equity presence in CEE, where regional funds “have seen record levels of fundraising in recent years and the region remains on the radar for global funds competing at the top end of the market for new investments and bolt-on acquisitions”. It notes that most of the region’s top 20 deals outside Russia involved non-strategic buyers. “With valuations expected to become more realistic, plenty of funds available to be deployed and some sizeable disposals in the pipeline, private equity activity in the region is set to continue on its upward trend.” 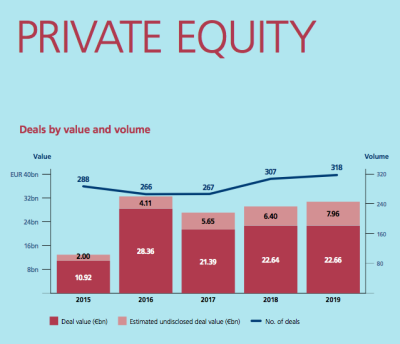 The fast growth experienced in CEE in recent years, which has so far been relatively unscathed by the slowdown in the eurozone, has been propped up by a combination of domestic private consumption and investment.

In this context, rather than a cooling of investor sentiment towards the region, the decline in deal activity “can potentially be explained by several protracted or aborted deals which resulted from a combination of disappointing performance or outdated business models by the target asset (from the buyer’s perspective) or unsatisfactory valuations (from the seller’s perspective),” says the report.

It goes on to forecast: “Over the next year, emerging Europe will live up to its reputation as a stable provider of investment opportunities, particularly in M&A. With a healthy pipeline, 2020 will show that the region is not running out of steam just yet.”

Ukraine the one to watch

The CMS report singles out Ukraine as not only the country with the fastest growth in deals in 2018 — 132 deals were recorded in 2019, a 25.7% y/y increase, and deal value reached a six-year high of €1.77bn — but also one to watch for 2020, as the new administration under President Volodymyr Zelenskiy is expected to push ahead with reforms. 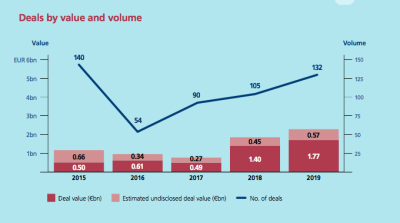 “Ukraine is at a turning point as a new reform-focused government seeks to put the country on track for an economic resurgence. President Volodymyr Zelenskiy has set an ambitious transformation programme, which he hopes will result in GDP growth of 40% over the next five years, raising $50bn in the process,” says the report.

Expectations that Ukraine will benefit from reforms are stimulating interest from foreign investors, as is the country’s solid economic growth recently, according to CMS. “Anecdotally, those working in the M&A field have reported the busiest period in five years,” it adds.

The deals in Romania in 2019 notably included a €506mn venture capital funding round for robotics company UiPath, led by US hedge fund Coatue, but that was just one of a growing number of deals in South-East Europe’s largest economy.

“The increase in deals is telling for the current Romanian market. Many good assets are coming to market and that has not gone unnoticed with globally active investors,” commented Horea Popescu, partner at CMS Romania, in the report.

Meanwhile in Slovakia, while deal volume was up by just 9.3%, deal value more than doubled to €1bn last year, which, CMS’s report pointed out, was boosted by two major TMT deals: the PPF Group’s purchase of Central European Media Enterprises and Vivendi’s acquisition of M7 Group.

The report also points out that while deal volume declined in some more mature markets such as the Czech Republic and Poland, overall deal value was up compared to 2018.

And while 2018 was an outstanding year for the Western Balkans, in 2019 dealmaking slowed but remained healthy, testament to continued investor interest in the region.

US blacklists Bulgarian judge and his family over “significant corruption”

Profits in Ukraine’s banking sector tripled in 2019 to hit UAH59.6bn as of December, as a full recovery of the sector is now well underway.

The West has lost the initiative to illiberal powers like China and Russia that are now acting on their own, according to the "Westlessness" report produced ahead of the Munich Security Summit.

After a very strong rally Russia’s stock markets have been hit by fears of a global coronavirus epidemic and collapsing oil price. The market has given up all its gains, but not so the utilities sector which is up 16% YTD.

Russia becomes a safe haven in an increasingly turbulent world
13 hours ago
Ukraine's bank sector profit triples in 2019 as the sector gets on the path to sustained recovery
1 day ago
"Westlessness" dominates the discussion at the Munich Security Conference
1 day ago
Russia’s utility sector set to rally in 2020 as reforms progress
3 days ago
TURKEY INSIGHT: Bearish sentiment builds on reports of foreign disinvestment and outsized bet against splintering lira
3 days ago