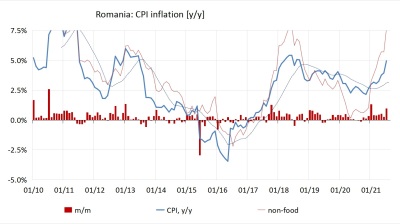 Central bank governor Mugur Isarescu pledged to “prevent energy prices from passing through into the regulated prices of utilities” but it remains unclear how this can be done.

Inflationary expectations can in principle be toned down, though, by more restrictive fiscal and monetary policies. The government has not yet published the budget revision that in principle should envisage a smaller deficit since the economy has recovered faster than expected.

Based on the harmonised consumer basket used in the European Union, the inflation rate in Romania is still only 3.8% in July, up from 3.5% in June.

Based on some individual consumption baskets of lower-income households, the inflation might be even higher than the headline figure.

Returning to the national official consumer basket, food prices increased on average by only 2.3% in July, compared to the same month of 2020. Non-food prices were dragged up (+7.6% y/y) by the energy prices that have further increased in July.