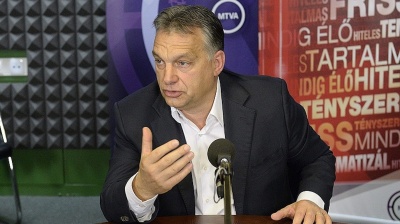 Since 2010, PM Viktor Orban has turned down requests to be interviewed by "unfriendly" media.
By bne IntelliNews May 16, 2019

Facebook has banned the advertising of Hungarian media group Mediaworks, which is closely aligned with the ruling conservative Fidesz, local media reported on May 15.

Mediaworks said it had not received a "concrete answer" from the social media company when it inquired about the reason for the ban. "Based on the news of Facebook's plans in the past weeks, it is obvious that there are political and ideological reasons for the American company's decision," Mediaworks said.

Mediaworks, which controls more than 90 national and regional media brands, was consolidated in the Central European Press and Media Foundation (KESMA) last November.

Facebook announced in April that it will allow news posted on its website to be disseminated only following preliminary checks and controls, in an effort to prevent the spread of fake news.

No media outlet in Hungary will be on the "white list" as Facebook labelled a significant part of the domestic media as not reliable enough.

At the international journalist festival in April, a Facebook employee privately told a journalist from independent business weekly HVG just one word "KESMA," referring to the foundation that controls some 500 pro-government media outlets.

KESMA became the largest media holding in the country in November after taking over 476 pro-government outlets. Half a dozen right-wing media owners, including Mediaworks' owner Lorinc Meszaros transferred their ownership to the foundation as a charitable donation.

KESMA includes online sites, printed press, radio and television channels overseen by a board close to the government.

Hungary's media landscape has changed dramatically over the last eight years. Media has become concentrated in the hands of oligarchs allied with Orban with vast financial resources in the form of state ads, while independent media is struggling to live off the market.

Hungary slipped in the ranking of media freedom in the RSF World Press Freedom Index in April, which showed Hungary ranked second to last among EU members after Bulgaria.

The massive media presence of the Fidesz government in the countryside has played a major role in the third landslide election victory of the party last April. Right-wing media played on the fears of voters with fake anti-refugee videos with distributed weeks before the election, which reached millions of people

Just days after the April festival state-funded think-tank Szazadveg came up with proposals to regulate Facebook.

A declaration following the conference on censorship and free speech listed eight ways in which "nation states" should regulate social media, especially Facebook, including the punishment of Facebook’s censors with the force of criminal law.

VISEGRAD BLOG: An average working day at the Hungarian parliament

Russia's Yandex.Taxi's IPO still on, as it struggles to stay profitable

Yandex.Taxi, the ride-hailing arm of Russian online giant Yandex, is pushing ahead with its plans to organise its highly anticipated initial public offering (IPO), while struggling to remain profitable despite the crisis

Russia's IT segment looks at losses in Q2

Hit by the coronavirus (COVID-19) crisis and lockdown measures aimed at curbing the pandemic, the Russian IT segment expects losses in the April-June period, unless support measures are offered by the government.

InoBat Auto says the factory will reduce EV manufacturers’ dependence on Asia and contribute to a strong European energy production and storage infrastructure.

Price advantage of combustion engine cars to disappear after Budapest announced €141mn of subsidies for purchases of fully electric vehicles and scooters.