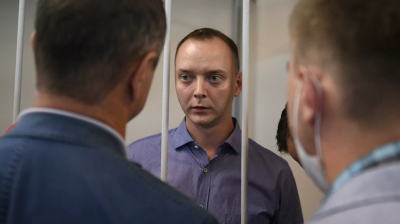 In what appears to be an escalating crackdown on Russian journalists by the Federal Security Service (FSB), famous defence reporter Ivan Safronov was arrested outside his apartment on June 7 and charged with treason. He faces up to 20 years in jail if convicted.

The arrest is only the latest of a series of arrests and cases brought against leading Russian journalists who have simply been doing their job, but have reported or commentated on sensitive topics.

And as the FSB itself released a high-quality video of the arrest shortly after taking Safronov into custody that appears to have been filmed with a camera not a phone – the Russian equivalent of the “perp walk” – there was an element a media campaign to the arrest, which some commentators say was designed by the FSB to send a message to journalists.

Safronov is particularly prominent and even Russian presidential spokesman Dmitry Peskov acknowledged he is a leading expert on defence when questioned about the arrest, but added the arrest “is not related to his journalist work.”

Safronov's lawyer Ivan Pavlov said it was the first time in nearly 20 years that a reporter had been accused of state treason in Russia, adding the fate of independent journalism was now on the line.

A number of media outlets, including Kommersant where Safronov used to work, issued statements in defence of Safronov, describing him as one of the best Russian journalists and a patriot.

"It is simply impossible to imagine Ivan, the son of an officer, to be a traitor," said Vedomosti.

Safronov followed in the footsteps of his journalist father, who also covered defence for Kommersant. Ivan Safronov senior died in 2007 after falling out of a window under murky circumstances. At the time of his death he was working on a story about Russia sending an air defence system and planes to Iran and Syria. Kommersant maintains his death was not an accident.

Safronov specialised in defence stories and has fallen foul of the authorities on several occasions. In 2019 he broke the story that Russia was in talks with Turkey to supply it with advanced fighter jets. The story was politically sensitive, as the US were also negotiating with Ankara over the sale of its fighters to Turkey and threatened sanctions against Ankara Turkey if the Russian deal went through.

Now the FSB is accusing Safronov of passing military secrets to an unnamed NATO country that was later reported to be Czechia. He was arranged in court yesterday in a closed proceeding and his entire trial will be closed, as it deals with state secrets, the authorities said.

Due the constant conflicts and pressure from the authorities and editors, Safronov had given up journalism only two months ago and joined the staff of Russian space agency Roscosmos as an advisor to the CEO Dmitry Rogozin, a Putin-appointee.

Roscosmos released a statement saying the arrest and investigation in to Safronov had nothing to do with its business and it was fully co-operating with the authorities.

Safronov’s arrest and charges echo the arrest of another high-profile journalist last summer, Ivan Golunov, on trumped up drug procession and trafficking charges. Golunov is an investigative reporter for Meduzza, the Latvian-based outlet set up by former Russian journalists who launched independent publications after suffering harassment by the authorities.

Golunov provoked a public outcry and swelling demonstrations outside the court house where he was being held. The three main Russian papers all came out with identical front pages shortly after saying “I/We are Ivan Golunov.” 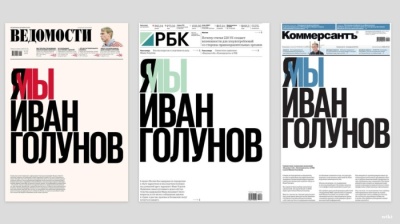 In the face of the growing protest the authorities eventually backed off and the charges were dropped. Since that incident the “I/We” logo (the two Russian words are interwoven into a graphic element) has become a standard for protests. The demonstrators in Belarus in recent weeks are wearing “I/We are the 97%” T shirts, a reference to Belarus President Alexander Lukashenko's low opinion poll ratings.

All of Russia’s leading media, including Vedomosti and Kommersant, both of which Safronov worked for, issued statements in support of the journalist and condemned the arrest as an attack on the free press and media freedoms.

Safronov's arrest comes on the heels of another high-profile case this week where RFE/RL journalist Svetlana Prokopyeva was on trial on charges of “justifying terrorism” following a column she wrote about a bomb attack on the FSB. She faced up to six years in jail, but in the face of the growing popular protest at her arrest the court convicted her as charged but only ordered her to pay a RUB500,000 fine ($7,000).

And another high-profile journalist, Ilya Azar from Russia’s leading investigative newspaper Novaya Gazeta, was released after 15 days in jail. Azar had been staging a one-man demonstration, which is legal in Russia, outside the FSB headquarters to protest against the arrest of ex-policeman and anti-corruption activist Vladimir Vorontsov, when he himself was arrested.

These one-man demos are becoming a fixture of the Russian political scene amongst the press and a regular feature that accompanies any arrest of harassment of working journalists or activists.

While television remains entirely under the Kremlin’s control and the internet is largely unregulated and full of opposition news sites and social groups, Russia’s newspapers are in a grey zone between these poles.

On the whole the newspapers are free to write what they like and are often outspokenly critical of the government. However, Russian journalists have told bne IntelliNews that in some cases they “get the call” from the Kremlin and are told to back off or tone it down. If they ignore the warnings then protestors can appear outside their offices or libel cases brought against the paper. Self-cenosorship is also common amongst Russian journalist as they try and sail the hazy line between reporting the news and avoiding retribution by the authorities. Safronov's arrest is widely seen as an attempt by the FSB to move that line towards less press freedoms and tigher censorship -- both self- and explicit.

The Kremlin has been tightening its grip over the press fro several years now. In 2014 it introduced a new media law banning foreigners from owning more than 20% of a publication. In 2018 the editor of RBK was forced out. And most recently an investigation into the ownership of Vedomosti, carried out by the paper’s own staff in co-operation with the other major papers, found it is now owned by Rosneft, Russia’s biggest oil company, which is run by Russian President Vladimir Putin long-standing confidant, Igor Sechin.

At the same time the number of court conviction on charges of treason and esiponage have risen dramatically in recent years. 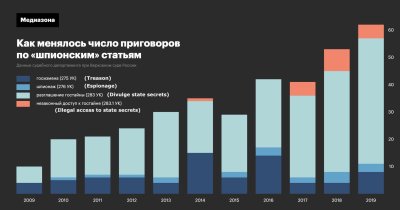 Russia’s manufacturing PMI slips to 50.4 in April as growth slows

MOSCOW BLOG: Russian economy starts to turn up but so does inflation

DATACRUNCH: Ukraine starts to close the gap with Russia
Russia’s manufacturing PMI slips to 50.4 in April as growth slows
MOSCOW BLOG: Russian economy starts to turn up but so does inflation

Tour of the region is also aimed at supporting the Western Balkans countries’ EU integration processes.