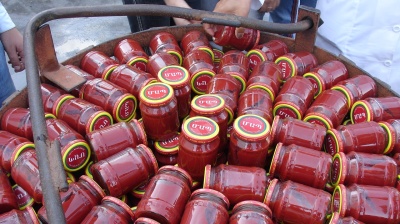 If the situation doesn't improve, Iran might soon be needing tomato paste imports such as shipments of this brand from Armenia.
By bne IntelliNews October 13, 2018

The Iranian government has banned tomato exports after instances of panic buying of tomato paste amid the economic turmoil caused by reimposed heavy US sanctions.

The severe devaluation of the Iranian rial (IRR), which last month reached around 75% against the dollar prior to a modest ongoing recovery, has boosted the financial attraction of exporting produce compared to selling it at home and this has impacted on stocks of tomato paste, a staple used in many Persian dishes.

Amid shortages, shops have been limiting purchases to prevent people from buying up all existing stock.

Iran has abundant crops of tomatoes and shopkeepers might expect to see the export ban turn things around, but Reuters reported on October 11 that the tomato policy is not working, with an industry representative saying tomatoes were being smuggled abroad.

“We have heard that trucks full of tomatoes are still leaving the country, especially to Iraq,” Mohammad Mir-Razavi, head of the Syndicate of Canning Industry, was cited as saying.

“They put boxes of greenhouse tomatoes on top and hide normal tomatoes at the bottom,” he said, referring to an exemption for hot-house grown tomatoes that left a loophole.

In early September, Iranian consumers were hit by shortages of nappies, incontinence pads and sanitary towels, with producers suffering a lack of raw materials caused by a lack of foreign currency allocations in Iran to buy supplies.

Hungary has so far drawn down €239mn of a €10bn loan from the state of Russia for an upgrade of the Paks nuclear power plant, it was announced on February 19. Answering an opposition query, ... more

The Kazakh central bank sold $489.4mn from its $62bn rainy day oil fund, the National Fund, on Kazakhstan’s domestic market in January for the purpose of financing the state ... more

Vodafone Ukraine, the second largest Ukrainian mobile operator, has placed a Eurobond issue for $500mn at 6.2% per annum. A source in the banking secotor told news agency Interfax that the demand ... more