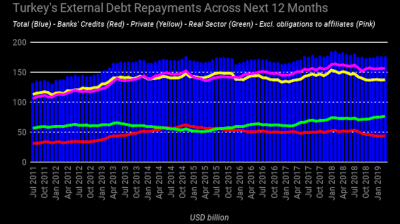 Garanti targeted borrowing $600mn but the final amount was set at a total of $783.8mn after demand of $1bn was encountered, the lender said in a press release.

In December 2018, the lender obtained a $1.3bn syndicated loan in four tranches with maturities of 367-days, 2-years 1-day and 7-years. The lender did not provide any further details on the costs.

In January 2019, Garanti Bank said in its operating guidance that it expected its syndication rollovers to be less than 100% due to high costs and comfortable liquidity.

Banks’ refinancing progresses undeterred
Despite new waves of economic turbulence now hitting Turkey, the Turkish lenders’ spring loan refinancing season that takes place in April and May is progressing undeterred. However, costs are higher and roll-over ratios are declining.

Also on May 17, central bank data showed that Turkey’s overall external debt repayment obligations for the next 12-month period edged up by 0.2% m/m to $177.4bn at end-March from $177.1bn at end-February. The figure stood at a record high of $185.9bn at end-February 2018 and declined to $173.9bn at end-October last year as a result of the ‘curing’ effect of the August currency crunch.

When lenders’ and corporates’ obligations to their branches and affiliates abroad are excluded, Turkey was obliged to repay $156.3bn in foreign debts across the next 12 months as of end-March, up from $156bn as of end-February.

Turkish lenders’ credit repayments across the next 12 months amounted to $43.8bn at end-March.