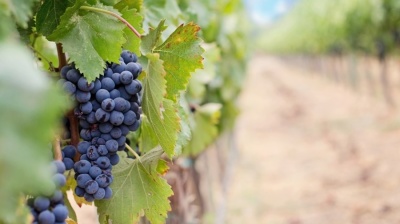 Russia remains the biggest market for Georgian wine exports with a 58% share in 2018
By bne IntelliNews July 31, 2019

The Georgians like to describe themselves as the “cradle of wine” with a rich, 8,000-year history of wine-making. Wine was produced and drunk in Tbilisi before the Roman Empire was founded and today it remains home to over 500 unique grape varieties.

For anyone that has spent time in the former Soviet Union then the most famous names such as Saperavi and Mukhrani will already be familiar. These were justly famous as some of the best wines in the communist block, but have only recently begun to be recognised in the West as the Georgian wine association attempts to break open new markets. Today the bulk of Georgian exports still go to Russia.

Having interrelated production processes, several large wine-making companies also produce brandy. While the history of Georgian brandy only begins in the 19th century, The country is already the 10th-largest exporter of brandy globally.

“In 2018, 245,000 tons of grapes were processed by over 300 wine-making companies, quite large  for a country with a small domestic consumption base. So it’s not surprising that some 85% of the wine and spirits sector’s revenue stream comes from exports, making it highly dependent on external markets,” Eva Bochorishvili, head of research at Galt & Taggart, the Georgian investment bank, wrote in a report on the country’s wine industry that was released at the end of July.

For a poor small country that lacks most natural resources, the Georgian wine and spirits business is one of the most profitable sectors in the country and is already a major export. 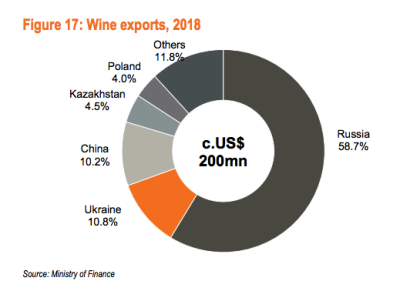 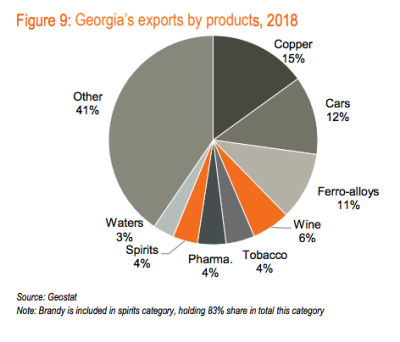 In 2017, the sector’s net profit margin stood at 26.0%, far above the 8.4% recorded for the total business sector, Bochorishvili reports. The sector’s revenue almost doubled during 2013-18, reaching GEL867.9mn ($291mn), with external demand being the main driver of revenue growth, as domestic sales stagnated.

Wine is Georgia’s fourth-largest export and brandy is the eighth-largest with 5.9% and 3.2% of the total figure respectively. Wine and brandy exports from Georgia increased at a compound average growth rate (CAGR) of 6.0% to $305.3mn during 2013-18, or 65mn litres of wine and 32mn litres of brandy exported in 2018.

“We expect 2019 to be another record-breaking year for the sector, with revenues set to increase up to 10% year on year thanks to an unprecedented grape harvest in 2018 and expected export growth,” Bochorishvili said in the report.

Georgia’s push to open new export markets has been given a huge impetus by a Russian embargo on the import of Georgian goods that was imposed in 2006. To break into Western markets producers were forced to up their game and improve the quality of Georgian wine to meet stricter European standards. Russia was almost the sole consumer of Georgian wine before 2006, absorbing 92% of total wine exports, but the embargo has resulted in new exports to the EU, Asian and other markets. Consequently Georgia now exports wine to 53 different countries.

Reorientation from Russian market is high on the agenda again. Once this market was reopened to Georgian wine in 2013, exports quickly rebounded to make it once again the largest single market for Georgian wine, although its overall share was reduced to c.60% of the country’s total wine exports in 2018.

“This is the result of brand awareness and reactivation of old trading networks. While the topic of a possible Russian trade embargo is closed for now, it disturbed winemakers and [the need] for further diversification [has] dominated recent headlines,” says Bochorishvili. “Low price per exported litre in Russia is another argument to intensify efforts to reorient from Russian market. On a positive note, [a] number of wineries [have] rejected relatively easy money in [the] Russian market since 2013 and invested heavily in expanding in non-traditional markets.”

Wine and spirits exports to non-traditional markets tripled in dollar terms during 2013-18, which seems a good achievement considering bottlenecks in brand promotion and positioning. The availability of various grants and subsidised loans from government in recent years considerably increased the number of small-scale wineries, with little capability to invest in brand development and distribution networks. Given the continued growth in wine consumption in Asian markets, enhanced efforts in brand recognition and distribution networks can generate $120mn in exports in the next five years, surpassing what Russia absorbs currently.

However, the challenges to developing the Georgian viniculture sector further remain significant. The wine and spirits sector lacks a unified strategy, says Bochorishvili.

“We interviewed a number of market players with an aim to identify major bottlenecks for export diversification. [The] absence of an industry collaboration platform or agreement regarding long-term positioning in export markets, weak corporate governance and little progress in cluster-building were identified as key difficulties by sector players amongst others. Technologically unsophisticated production methods, [the] high production cost of grapes, the low yields, a lack of consistency in price and quality and fragmented processing base are other factors dragging consolidation and economies of scale in the industry,” says Bochorishvili.

The main wine-making region in Georgia is Kakheti, which contains 73% of the country’s vineyards and grape production. Georgia has 18 wines with a protected designation of origin, of which 14 are located in Kakheti. The most common grape varieties in Georgia are Rkatsiteli and Saperavi, converted into white and red wines respectively.

But viticulture is very fragmented in Georgia. Despite its ancient pedigree and huge hinterland, the the vast majority of vineyards are owned by households that use technologically unsophisticated production methods. This is the main reason why yield in Georgia at 3.8 tonnes per hectare is 2.1x lower compared to productivity in European countries and 2.6x lower than the world average, thus showing considerable room for improvement in the sector.

The LSE-listed lender’s CFO Giorgi Shagidze spoke to bne IntelliNews about the bank’s plans for a country that has won international plaudits for its reforms.

Best known as “Europe’s last dictatorship”, Belarus has a secret. Over the last decade it has grown a blossoming high tech industry that earned the small northern republic nearly $15bn last year – as much as Russia earns from arms exports.