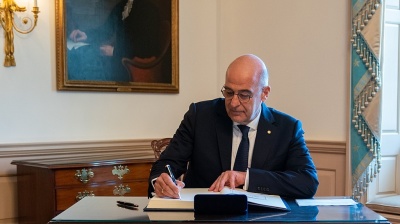 Greek Foreign Minister Nikos Dendias described the Turkey-Libyan accord as a “blatant violation of international law”.
By bne IntelliNews December 6, 2019

Greece said on December 6 it was expelling the Libyan ambassador as an expression of its anger over an accord struck between Libya and Turkey on maritime boundaries that does not heed the presence of the Greek island of Crete.

The deal is seen as the latest stage of Mediterranean states laying down strategy and tactics to claim untapped offshore oil and gas reserves in the region.

Greek Foreign Minister Nikos Dendias told a news conference that the Turkey-Libyan accord signed on November 27 was a “blatant violation of international law”. He said the ambassador, Mohamed Younis AB Menfi, had 72 hours to leave the country, although he added that the expulsion did not mean Greece was severing diplomatic relations with Libya. Reuters quoted another foreign ministry official as saying that Libya had “deceived” Greece.

“This is a legally invalid document,” Greek Prime Minister Kyriakos Mitsotakis told parliament. “Not only is it geographically and historically invalid—wiping Greek islands off the map—but because it led Turkey to an unprecedented diplomatic isolation,” he said, adding: “It’s just a piece of paper nobody recognises.”

Libyan Foreign Minister Mohamed Siyala told Reuters Greece’s decision was not acceptable, and Libya would have reciprocated if Greece had diplomatic representation in the country.

“It is Greece’s right to go to the International Court of Justice and to the legal channels to remove any confusion. But to take the stand of expelling the ambassador, summoning him and escalating the situation, this is unacceptable to the Libyan government,” Siyala was also cited as saying.

Turkish Foreign Minister Mevlut Cavusoglu condemned the move, telling reporters in Rome. “Expelling an ambassador just because of the [agreement] that we signed is not a mature behaviour in diplomacy. This is outrageous.”

Turkey and the internationally recognised government of Libya have not only defined their boundaries with the accord, they have agreed expanded security and military cooperation. Turkey is backing the government in its war with rebels that are seeking to overthrow it.

Mitsotakis said the speaker of Libya’s parliament would be in Athens in coming days for consultations.

Greece and Turkey are also in dispute over issues including mineral rights in the Aegean Sea and Turkish drilling for hydrocarbons off Cyprus, which the Greek Cypriot government and the European Union say infringes Nicosia’s exclusive economic zone. The EU has prepared a sanctions package aimed at Ankara in response.

On December 5, Cyprus announced it has petitioned the International Court of Justice (ICJ) to safeguard its offshore rights.

Earlier this week, top Turkish and Greek officials met on the sidelines of the Nato summit in England to address bilateral issues.

French renewables company Voltalia has won a tender for the construction of the 140 MW Karavasta photovoltaic park in southern Albania worth €100mn, Albanian PM Edi Rama announced on May 27. The ... more

The Polish power grid operator PSE, together with its peers from Estonia, Latvia, and Lithuania, jointly filed for €1.2bn of EU funding to advance the project to sync the Baltic states’ grids ... more