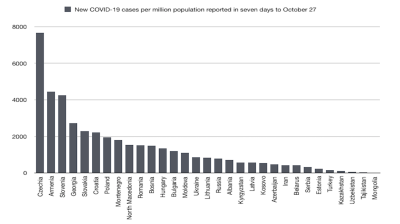 Most of Europe – including much of the Central and Southeast Europe region – reported over 1,000 cases per million population in the seven days.
By bne IntelliNews October 29, 2020

New coronavirus (COVID-19) cases continued their rise in several Central and Southeast European countries, in line with a sharp rise across Europe, data from the World Health Organisation (WHO) shows.

New restrictions are being introduced, and several governments have warned they will return to lockdown if cases continue to increase sharply, despite the expected damage to their economies.

According to the WHO’s latest epidemiological update, globally over 2mn new cases were reported in the seven days to October 27. As the global centre of the epidemic has shifted again, for the second week running the European region accounted for the largest share of reported new cases – over 1.3mn during the week, which is a 33% week-on-week increase.

Most of Europe – including much of the Central and Southeast Europe region – reported over 1,000 cases per million of the population in the seven days.

On a more positive note, although the number of deaths is gradually increasing, the proportion of deaths to cases remains relatively low compared to the early phase of the pandemic in the spring, the WHO said.

During this period, in emerging Europe Czechia had the greatest increase in new coronavirus cases compared to its population; a total of 81,970, or 7,669 per million of the population.

Both Slovenia and Armenia – which has been reporting high infection figures since the start of the pandemic – have reported over 4,000 new cases per million inhabitants in the last week, and there were over 2,000 each in Croatia, Georgia and Slovakia.

“In Czechia, where new deaths per 1 million [of the] population are currently the highest (67) since the start of the pandemic, hospitals are expected to be at maximum capacity by mid-November,” the WHO wrote.

Last week, Prague limited free movement of citizens and ordered the closure of most retailers in the country. Most of the measures will stay in effect until the end of the state of emergency on November 3.

This was followed by an overnight curfew for all citizens announced by Health Care Minister Roman Prymula on October 26. The government also limited working hours of retailers. They must be closed between 8pm and 5pm from Monday to Saturday and fully closed on Sundays. The exceptions are pharmacies, filling stations, and airport and railway station shops. Foreign Minister Tomas Petricek said on October 28 he cannot rule out a complete lockdown if the current measures don’t have the desired effect.

Slovakia’s Prime Minister Igor Matovic announced on October 22 the country will follow its neighbour and close most of its schools and require the population to stay at home expect for trips to be tested, going to work and securing essentials or taking a walk close to their homes, to mitigate the second wave of the coronavirus epidemic. “This is the last way to avoid a total lockdown that many other countries have gone for,” Matovic told reporters, quoted by Reuters.

In an attempt to tackle the crisis, Slovakia has become the first country in the world to start the pilot stage of mass testing for COVID-19 in two of the most severely affected districts. A total of 140,945 people had themselves tested on October 23-25.

There has also been a worrying growth in new infections in Poland, which is now considering a new lockdown as it failed to stop the spread with softer measures. Poland reported a record 18,820 new cases on October 27.

The government has been incrementally tightening restrictions since October 1, when the number of new cases began a rapid rise. The most recent batch of safety rules saw higher grades in primary schools switching to online mode as well as limits on public gatherings and a shutdown of gastronomy, except for takeaway orders. However, Prime Minister Mateusz Morawiecki says the country won't return to full lockdown.

In Southeast Europe’s worst affected country, Slovenia, a lockdown, including an overnight curfew, has already been imposed. The list of facilities that will be closed includes hotels and restaurants, casinos, hairdressing and beauty services, wellness and fitness centres, swimming pools, cinemas, cultural and other service providers.

“In the last week, Slovenia reported their highest daily increase in the number of new cases, 1,964; the rapid rise in cases has resulted in the healthcare system being stretched to capacity,” commented the WHO on October 27.

In neighbouring Croatia, which reported 2,227 cases per million of the population during the week, Health Minister Vili Beros called for the total mobilisation of the public health system. The country’s crisis management team presented a new set of measures on October 25, which include a 50-person cap on attendees at public gatherings, while sports events will be held without spectators for the next 14 days. However, Interior Minister Davor Bozinovic has ruled out a new lockdown or overnight curfew.

Amid a worsening of the situation in the South Caucasus, Armenia reported 4,443 cases per million of the population during the week.

The escalation of hostilities between Armenia and Azerbaijan over the Nagorno-Karabakh enclave has made it much more difficult to fight the spread of COVID-19. The WHO regional director for Europe, Dr Hans Kluge, commented on October 22 that “the hostilities are already contributing to a dramatic acceleration in COVID-19 transmission. Continued cycles of violence and subsequent population displacement will exacerbate the precariousness of the health situation.” Specifically, the "conflict is causing a direct disruption to healthcare, further burdening health systems that are already stretched by the pandemic,” said a statement from the WHO.

Neighbouring Georgia, which largely managed to escape the first wave of the pandemic, has now been reporting high numbers of new cases. Georgia, despite its small population of around 4mn, announced nearly 2,000 coronavirus cases in a 24-hour period spanning October 24-25, including more than 1,000 cases in the capital city Tbilisi that has emerged as a major virus hotspot. The Black Sea region of Adjara played a key role in spreading the virus during the summer months because of its holiday resorts.