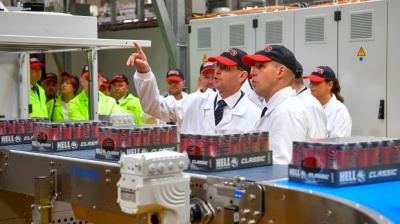 Finance Minister at the launch of the new production line
By Levente Szilagyi in Budapest July 22, 2019

Hungary's leading energy drink maker has expanded production by inaugurating a new production line at its base in northeast Hungary on July 19. The investment has been backed by a HUF1bn (€3.1mn) grant under the government's large company support scheme for companies ineligible for EU funding.

The sale of energy drinks is one of the fastest-growing segments of the FMCG market, with double-digit growth recorded in the last ten years. Sales reached HUF33bn in the 12 months between June 2018 and May 2019.

Three out four teenagers in Hungary occasionally drink energy drinks, while 13% consume these brands on a daily basis. Cardiologists warned that their high sugar and caffeine content can lead to heart rhythm disorders when consumed regularly.

The company started its operations in 2006 as a family-owned business and in just three years became the market leader in the energy drink segment, beating multinational rivals, and it is also one of the most vigorously evolving FMCG brands on the global markets. Thanks to an aggressive expansion policy and heavy investments worth €220mn in the last eight years, Hell Energy became Hungary's second-largest soft-drink maker after Coca-Cola with HUF33.3bn in annual sales in 2017. In comparison, the US-based soft drink giant generated HUF116bn.

It also produces ice tea and other fizzy drinks, but energy drinks account for bulk of the sales from its flagship unit. Hell Energy sells its products in more than 50 countries around the world. In the energy drink segment, it is a market leader in Hungary and nine other countries, including Romania, Bulgaria, Greece and Croatia. In 2017 exports exceeded sales in Hungary with HUF18bn compared with HUF15bn.

Since the inauguration of a state-of-the-art bottling factory in 2011, the company has brought the entire production process under its own supervision from manufacture to bottling and logistics. In 2017 it opened a 42,000-square metre plant with a capacity to produce 48,000 cans an hour from a HUF30bn (€931mn) investment which allows the company to export cans for other manufacturers. In line with the expansion, it has opened new logistics facilities over the years.