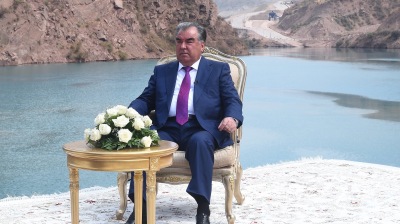 Tajik president made a rare outburst calling on Russia to "respect" the Central Asian states during a CIS summit. / bne IntelliNews
By Maximilian Hess in London October 17, 2022

Winston Churchill once alluded to Kremlin power struggles as 'bulldogs fighting under a carpet' – “an outsider only hears the growling, and when he sees the bones fly out from beneath, it is obvious who won”.

Churchill was, of course, alluding to Kremlinology relating to the Soviet politburo, but the allusion has often been used to reference infighting in Putin’s Kremlin. On 14 October, however, a summit in the Kazakh capital of Astana showed how it can still apply to relations among the former Soviet states, at least those that, like Russia, are still governed by undemocratic and oft-despotic strongmen.

But the bone that flew out of the Commonwealth of Independent States (CIS) summit in Astana has shocked many – for it was Vladimir Putin’s. And the bulldog who spat it out was Tajikistan’s President Emomali Rahmon.

Video from the summit of Rahmon berating Putin and demanding that Russia treat Central Asian states with respect has gone viral, racking up 6mn views as of the time of writing. In his seven-and-a-half-minute diatribe, Rahmon calls on Putin to invest more in Central Asia, effectively accusing him of lying about the number of Tajik migrants in Russia, and warns that paying insufficient attention to small nations risks repeating the mistakes of the Soviet collapse. Rahmon’s warning that Tajik migration is likely to decrease to Russia may even have been a threat – after all, Moscow may well need migrant labour to plug the holes in its economy caused by the drafting of men to fight for Putin's cause in Ukraine, which even Putin has admitted has been poorly managed.

Landlocked Tajikistan, the poorest former Soviet republic, is home to Russia’s largest military base abroad (excluding those in occupied Ukraine). Despite Rahmon’s assertion, it is also the most dependent on migrant labour. It is as if a handbag-sized French bulldog spit out the bone of a champion boxer – as the stunned guises of the other Central Asian leaders, not to mention Putin himself, attest.

Rahmon’s outburst was particularly striking, as the tea leaves in the weeks prior to it gave no indication such a statement would be forthcoming. When Tajik forces shelled Kyrgyzstan’s Batken district in the latest, and most intense, bout of their long-running border dispute, Russian state media was broadly more positive regarding Dushanbe’s actions than Bishkek’s. And although Putin reportedly shifted at least 1,500 of the 7,000 Russian soldiers from their Tajik base to the front in Ukraine, Putin awarded Rahmon the 'Order of Merit for the Fatherland' in the third degree after the fighting, including for his services to "ensuring regional stability and security," shortly after the fighting ended.

Speculation has been rife as to what prompted Rahmon’s outburst. Tajikistan’s media environment is strictly controlled, with officials all but barred from speaking to foreign reporters and interlocutors, even off the record. There is no democratic accountability. And lest there be any doubt, Rahmon’s statement by no means should be seen as casting him as a new leader against the bogeyman of Russian colonialism or of small third-world state’s rights – he is currently waging his toughest crackdown on the country’s Pamiri minority to date.

There has been speculation that Rahmon may have been motivated by attempts by Putin to mediate in the conflict with Kyrgyzstan in a meeting the previous day with Rahmon and Kyrgyz President Sadyr Japarov. Putin said that he had presented them with documents about the border in an attempt to address the dispute, noting that "in Moscow there is often more relevant information on the borders of the union republics (ex-Soviet states) than in these republics themselves". Rahmon criticised Moscow’s approach to the region openly, Rahmon’s erstwhile bête-noire, the late former Uzbek dictator Islam Karimov, reaped little benefit from his approach.

But there is no reason to believe that Rahmon’s criticism was an open declaration that he will distance himself from Moscow. Rahmon’s policies are set only by what is best for himself and his family, who dominate the country’s politics and industry. An open conflict with Moscow would threaten both, as even in the Kremlin’s present geopolitical position, significantly enervated by Putin's wanton war on Ukraine, Tajikistan has no other alternatives. While Europe has laid plans to increase its investments in the country despite its human rights record, it remains too distant and disjointed to respond. Washington is also not a potential panacea. And while China dominates foreign direct investment (FDI) into the country, and holdings of Tajik debt, there is no chance it will change its approach to Russia on the basis of Rahmon’s actions.

What Rahmon aims to achieve remains uncertain. But whether it is Putin’s approach to the Kyrgyz border, or just an attempt to demand more investments (and thus the size of the pie that Rahmon’s family and associates can feast on), it is the latest indication that something has fundamentally changed in Russia’s geo-strategic position even in the former Soviet ‘near abroad’ following the folly of his 24 February full-blown invasion of Ukraine.

A day after Rahmon’s outburst, at least 11 Russian soldiers were killed at a training base in the Valuyki district of Belgorod Oblast, near the border with Ukraine. A Telegram channel considered close to the Kremlin and which typically blames Ukrainians for almost every misfortune to befall Russia almost immediately blamed two Tajik volunteers. There is no precedent for such an attack by Tajiks against the Russian military.

The fight under the carpet continues, but the growling is increasingly deafening.

Maximilian Hess is a London-based political risk consultant and a fellow at the Foreign Policy Research Institute. You can follow him on Twitter @zakavkaza and pre-order his forthcoming book, Economic War: Ukraine and the Global Conflict Between Russia and the West, from Amazon.