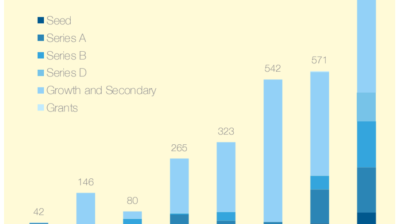 The war in Ukraine has hurt companies exposed to the domestic economy like e-commerce and ride sharing, but other companies have stayed in business and retained their valuations, according to a new report. / wiki
By Adrien Henni of East West Digital News in Paris June 7, 2022

AVentures Capital, one of Ukraine’s top venture firms, has just released a new edition of its Dealbook of Ukraine. Each year, this publication offers an overview of the deals and trends involving Ukrainian and Ukrainian-founded tech companies, reports East West Digital News.

A “record-high VC and PE volume” is reported for 2021, with more than $830mn invested in such companies, up 45% from the previous year.

The related M&A activity was high, too, with at least 28 exits of product and IT service companies reported in the course of 2021. 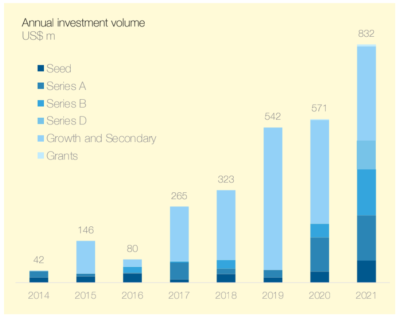 The impact of the war

The report also provides an analysis of the impact of the war on the technology sector in the two months following Russia’s attack on February 24, 2022.

While the Ukrainian economy as a whole could fall by one third or even more this year, the tech sector seems more resilient.

The country’s IT service industry has been relatively resilient to the war, too, “since most IT service companies serve global clients.”

Understandably, however, companies reported lower levels of employee productivity during these months.

“Yet Ukrainian professionals are adapting to this new challenging environment and believe the previous productivity levels can be attained soon,” AVentures Capital believes.

Salaries in the IT sector have fallen, at least for new hires, for the first time since the first coronavirus (COVID-19) wave in early 2020. On certain job sites, the number of candidates sometimes exceed the number of available vacancies.

A nation united for victory

While the nation has united in a tremendous effort, “most IT professionals combine volunteering with their job,” AVentures Capital notes. Thus there would be more people joining the military as volunteers than as mobilised resources.

A number of independent initiatives to help the army have sprung up, “inspiring optimism for an imminent victory.” Other initiatives have aimed to support specifically tech companies affected by the war. These include: Free Ukraine Foundation, a non-profit that provides monthly grants of up to $6,000 to Ukrainian startups in addition to consulting, tech support and network support; The Google for Startups special $5mn fund for Ukrainian startups with up to a $100,000 grant per team in addition to mentorship; UAFounders, a marketplace where Ukrainian startups can post requests to raise funds, find new markets or hire, with companies – notably from France – responding to them or publishing their offers; 7Wings, a support fund that will issue grants of $50,000 to Ukrainian startups.

Military tech on the rise

The report also notes “the revival of military tech.” According to AVentures Capital’s analysts, war-oriented technology, cybersecurity and e-government are “likely to emerge as new major verticals in the Ukrainian tech ecosystem.” Ukraine’s military technologies include the now-famous coastal anti-ship cruise missile R-360 Neptune, which has been developed since 2014 by the LUCH State Kyiv Design Bureau, and struck Russia’s flagship Moskva last month. The Aerorozvidka drones for aerial surveillance are another example of Ukrainian military technology, combining thermal imaging cameras and small 1.5kg bombs. Initially developed by a group of volunteer IT specialists, these drones helped stop the 65-km long column of Russian armed vehicles on its way to Kyiv in March, according to the report.

COMMENT: Can Russia pivot its European gas sales to Asia?
Missiles or sabotage: What caused the explosion at the Russian airbase in Crimea?
Population decline to take Emerging Europe back to the early 20th century

Russian e-commerce turnover up 1.5-fold in 1H22
1 day ago
Home of the humbled lira, Turkey’s the biggest cryptocurrency market in the Middle East
1 day ago
Business Insider: Western tech majors have tested or used controversial Russian face recognition technology
8 days ago
From 4G to 6G: How Russia seeks to develop mobile networks amid shortages of domestic frequency and foreign equipment
8 days ago
Should I stay or go for founder of Russian internet major Yandex
12 days ago