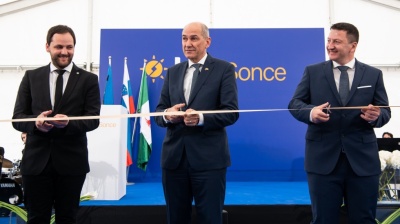 Prime Minister Janša in Prapretno attends the opening of the largest solar power plant in Slovenia. / Cabinet of the Prime Minister
By bne IntelliNews April 10, 2022

Slovenia’s state-run power company HSE opened a 3.036 MW solar power plant near central town of Hrastnik on April 8, the largest facility of this kind in the country, worth €2.5mn, the company announced.

HSE, which is the largest electricity producer in the country, is following the EU's guidelines for reducing its carbon footprint with new investments in renewable sources. The importance of the project is even bigger taking into account the lack of energy due to the EU’s plans to reduce dependence on Russian gas.

The plant was opened in a rehabilitated section of the Prapretno landfill and former coal region. It is expected to provide electricity for around 800 households, HSE said in the statement.

6,748 solar modules will produce more than 3 GWh of electricity per year in the former degraded area. In the coming years, the power plant will be expanded to a total capacity of 15 MW.

The power plant delivered the first electricity to the system as part of start-up and test period on March 28 and the connection to the distribution network was carried out in cooperation with Elektro Ljubljana company.

At the opening, Prime Minister Janez Jansa addressed the event saying that the domestic resources are ten times more valuable now than they were before the Russian attacks on Ukraine in February and the energy crisis.

“[T]he construction of small hydro and small solar power plants is not only something that needs to be promoted from an environmental point of view and a green transition, but also from a safety point of view,” Jansa said.

HSE’s general director Viktor Vracar said that the HSE Group will continue to invest intensively in projects that are economically and environmentally justified and in line with the adopted strategic guidelines in the field of decarbonisation of society and sustainable development.