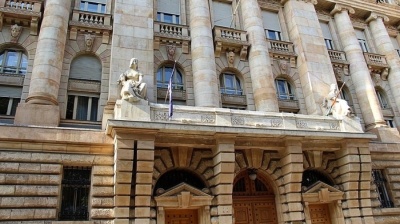 By Levente Szilagyi in Budapest August 28, 2019

The Monetary Council (MC) of the Hungarian National Bank (MNB) left the central bank's overnight deposit rate at -0.05% and the base rate at 0.90% at a monthly policy meeting on August 27, in line with unanimous forecast by analysts.

As in previous months, policy makers stressed that the upside risk to inflation of strong domestic demand was in contrast with weakening external activity, adding that ongoing deterioration in external activity indicates strengthening in downside risks to the longer-term inflation outlook.

The decision and the statement after the meeting kept the forint at near its record low against the euro at 330. Against the dollar, the local currency was trading at a 2.5 year high of 297.

The council noted that the MNB's measure of core inflation excluding indirect tax effects, a bellwether indicator of underlying inflation, had fallen to 3.2% in July, while inflation of industrial goods, as well as services, had slowed.

Policymakers expect the figure to decline gradually to 3% from the end of 2019, further widening the maneuvering room for the MNB to stick to dovish policies.

The increase in consumer prices in the first half of the year close to 4% fuelled speculation that the MNB would be forced to make a policy shift, but the latest inflationary figures showed the headline and core inflation decelerating from multi-year highs. The incoming data confirmed MNB’s baseline projection in the quarterly inflation report from June.

The MNB raised the O/N deposit rate by 10bp at the March meeting, marking the first policy tightening in years, but that turned out to be a one-off and was the start of an easing cycle as many had expected.

In recent meetings, the MC said decisions on monetary policy will become more data-driven. The next inflation report is due out next month giving the market a better clue for future outlook.

Factors impacting the outlook for inflation include the spillover of disinflationary effects of a slowdown in Europe, changes in the monetary policies of the world's leading central banks, the effect of the new Plus retail government security on savings, and the economic consequences of counter-cyclical fiscal policy, the MC said.