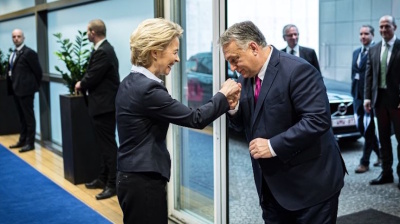 Through its continuing vetoes Orban (pictured with Commission President Ursula von der Leyen) may have overplayed his hand, antagonising his EU partners, and the move could hurt the country’s chances to access vital EU funds at a time when its economy is tanking. / Facebook
By Tamas Csonka in Budapest December 7, 2022

Hungary blocked the European Union's €18bn loan package for Ukraine on December 6 at a meeting of EU finance and economy ministers (Ecofin) in a vote requiring unanimity.

Hungary has been holding up aid for Ukraine as well as EU approval of the OECD's proposal for a minimum corporate tax as part of an attempt to unfreeze €7.5bn of Cohesion Fund money and €5.8bn of Recovery and Resilience Fund (RRF) cash that the bloc has held onto because of Budapest's violations  of the rule of law. Decisions on all these issues will now be pushed onto the agenda of a summit of EU leaders on December 15.

Through its continuing vetoes Hungary may have overplayed his hand, antagonising its EU partners,  and the move could hurt the country’s chances to access the vital EU funds at a time when its economy is tanking.

Hungary’s foreign diplomacy hit a low with today’s veto, opined Andras Racz, a senior research fellow at the German Council on Foreign Relation. The veto is not just morally unacceptable but is not "strong enough", as it won’t prevent Ukraine from  receiving aid eventually from the EU, albeit it may come later and at a higher cost. Furthermore, the government will have to bear the consequences of its action, he posted on social media.

"We will not be discouraged. Our ambition remains that we'll start the disbursement of our aid to Ukraine in January," he added.

Hungarian Finance Minister Mihaly Varga told a press conference after the meeting: "We have had bad experiences with joint loans, one taken out during the pandemic."

Linking payment of EU funds to unrelated issues would create a dangerous precedent, Varga told journalists after the last Ecofin meeting of the year, where the question of unlocking  €7.5bn of EU funds for Hungary was eventually not put on the agenda.

Prime Minister Viktor Orban  called reports on the veto fake news, recalling Budapest’s readiness to provide financial assistance on a bilateral basis.  Hungary’s strongman said the government earmarked HUF70bn (€169mn) in aid to Ukraine in the budget based on a bilateral agreement.

The ministers were supposed to vote on a recommendation last week by the European Commission to freeze 65% of cohesion funds assigned to Hungary from the EU budget until the end of 2027 over corruption risks.The ministers also delayed any decision on Budapest's spending plan for another €5.8bn from the post-pandemic RRF fund. If EU members fail to endorse Hungary’s RRF plan and if relevant contracts are not drawn up before the end of 2022, Hungary will lose 70% of the money for good.

At the press conference, Varga said several member states have called for an objective evaluation of Hungary fulfilling its commitments and a review of the steps taken after the November 19 deadline. Varga named France and Germany among countries that see the Commission's evaluation as "disproportionate". He expressed hope that the EC would conclude the procedure with a more "objective" assessment.

Ukraine anti-corruption officers raid home of Kolomoisky
RBI's 2022 profits soar to €3.6bn, with Russian operations representing more than half
bneGREEN: Most growth in power generation by 2050 will be solar and wind – BP