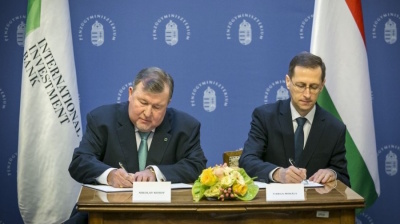 The IIB moved its headquarters to the Hungarian capital Budapest from Moscow in 2019.
By bne IntelliNews March 3, 2022

The trickle of countries leaving the Russian-dominated International Investment Bank (IIB) and the the International Bank for Economic Cooperation (IBEC) has now become a flood.

The Czech Republic, Bulgaria, Slovakia and Romania have announced that they will quit the two Soviet-era international banks because of the Russian invasion of Ukraine, leaving Hungary – which hosts the IIB’s headquarters – isolated as the only EU country which remains. Poland already quit the IIB in 2000 but now aims to leave the IBEC, which reportedly is now set to be wound up because of the exodus of members.

"Due to the ongoing and escalating, unjustified, unprovoked and ruthless military aggression by the Russian Federation against Ukraine... we decided to take steps to stop participating in the International Bank for Economic Cooperation and the International Investment Bank," the countries said in a joint statement.

The Moscow-based IBEC and IIB – which moved its headquarters to the Hungarian capital Budapest from Moscow in 2019 – were set up by the Soviet Union to facilitate trade and investments in the communist bloc.

The Hungarian opposition has also called for withdrawal from the IIB. Hungary, which re-joined the IIB in 2015, is now the second-biggest of the lender's nine shareholders.

"As a member of the EU and Nato, [Prime Minister Viktor Orban] should condemn [Russian President Vladimir] Putin's aggression against Ukraine and join EU sanctions against Russia by suspending the expansion of the Paks power plant and expel with immediate effect the Russian spy bank," Marki-Zay said on February 24, referring to the Budapest-based IIB. The bank has been regulary criticised by Western security experts for being a potential security risk, particularly for the way that its staff in Hungary have been granted diplomatic immunity.

The Czech government – which had previously announced it would accelerate its planned departure from the two banks – decided on March 3 that the Czech Republic will immediately terminate its membership of the IIB and the IBEC, as a result of Russia's invasion of Ukraine and the possibility that Russia could use both institutions to circumvent sanctions, said Czech Prime Minister Petr Fiala.
"These banks were established during the period of the Council for Mutual Economic Assistance (CEMAC) and some of them are at risk of being used by Russia to circumvent sanctions. It is necessary to leave as soon as possible," Fiala said, as quoted by the Czech News Agency. "For IBEC, the departure of [Czechia, Bulgaria, Poland, Slovakia, Romania and Hungary] will mean its termination," the prime minister added.
According to Czech Finance Minister Zbynek Stanjura, membership in these institutions brings Czechia no economic benefits. “Both banks are relics of a bygone era. The impact of the termination of membership on Czech businesses will be minimal. We are also co-ordinating all actions with other EU member states that are also members of the IIB or IBEC," said Stanjura.

The IIB is a development bank set up during the communist era and later revived by Russia. IIB provides loans to companies from member states. Its shareholders are Bulgaria, Cuba, the Czech Republic, Hungary, Mongolia, Romania, the Russian Federation, Slovakia and Vietnam. Last year it made a profit of €7.9mn, up 8%, and had assets of €1.8bn, up 20%.

IBEC provides targeted support for export and import operations in the member countries of the bank by providing loans and participating in syndicated transactions. IBEC members are Bulgaria, the Czech Republic, Mongolia, Poland, Romania, Russia, Slovakia and Vietnam. It had assets of €749mn last September.

Home of the humbled lira, Turkey’s the biggest cryptocurrency market in the Middle East
Dollarisation in Turkey smashing records
Western capitals wonder what kind of sanctions deal Erdogan may have cooked up with Putin