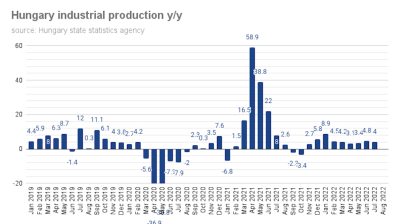 Hungary’s automotive industry bounced back to an annualised 16.6% growth in July, the highest this year, up from 2.9% in the previous month, a detailed release by the Central Statistics Office (KSH) on September 14 shows.

The sector was challenged by the semiconductor shortage and supply chain problems for most of 2021. Growth sputtered after the breakout of war in Ukraine. Output fell 13.3% y/y in March and 7.1% in April, only to bounce back in the following month.

Output of the food, drinks and tobacco sector, the second-largest segment with a 13% weight, climbed 7.4% during the month. Output of the computer, electronics and optical equipment segment, accounting for 9% of manufacturing, rose 14.4% y/y.

The KSH confirmed the 4% headline growth in its detailed reading and 6.6% growth, according to workday-adjusted figures. Output was up 1.1% m/m and by 4.9% in the first seven months.

The data beat analysts’ expectations, as growth in Hungary’s major export markets in Europe have decelerated. Economists pointed to risks from surging energy prices. Domestic industrial producer prices expanded to an all-time record of 53% in July.

After the release of the preliminary figures, ING Bank senior analyst Peter Virovacz said the outlook of the industry remains "extraordinarily uncertain" due to the possible resurfacing of supply chain problems and the negative impact of the energy price shocks. According to an international survey by recruitment agency Manpower, a quarter of Hungarian businesses plan to cut staff in the fourth quarter.