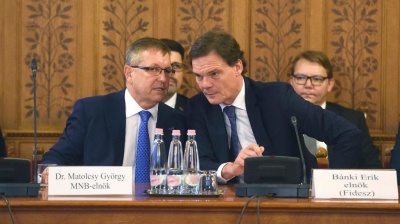 Although there are signs of overheating in some sectors, the economy as a whole is not in a state of overheating, central bank (MNB) governor Gyorgy Matolcsy said on November 18 in a committee hearing. At a review of the bank's 2018 annual report, Hungary's leading central banker said he expected the MNB to double profits this year.

Hungary’s economy extended gains in Q3, rising by 5% y/y, way above analysts’ forecasts. Domestic growth has decoupled from weak European and German industrial performance mainly because of the production of new car models, strong domestic demand and increases in export capacity in the sector.

Domestic consumption has been another leg of the outstanding growth. Hungarian consumers have enjoyed double-digit wage growths in the past years and the rise in wealth has triggered the rise in demand for consumer durable goods and market-based services.

If the economy was overheated, inflation would not have been 2.8%, Matolcsy told MPs at a committee hearing in parliament. Headline inflation picked up in October, rising to 2.9% from 2.8% in the previous month, above consensus, while the central bank's key tax-adjusted inflation number also rose to 3.7% in October from 3.4% on the back of rising food prices.

Matolcsy said he expected average inflation to be around 3.3% this year, which is in line with the September forecast of the MNB. When asked about the weak forint, he stressed that the central bank had no exchange rate target. It would be a big problem if it had a target, he added.

Parliament’s economic committee also reviewed the central bank’s 2018 annual report, which showed HUF48bn (€143mn) in profits. MNB has been profitable every year since 2013. The composition of earnings has changed since 2017,as exchange rate gains have decreased and interest income has gone up.

The MNB is on track to reach HUF100bn in profit this year as H1 net profit came to HUF50bn, Matolcsy said.

Matolcsy also praised the central bank’s efforts to reduce the share of external debt and increase domestic financing. The share of foreign currency debt has fallen from over 50% to below 20% in nine years, which could be further reduced, he said.

In a ceremony organised by the MNB, Matolcsy said Hungary has achieved "the golden triangle" of creating political stability, financial equilibrium and economic growth at the same time in the last ten years.