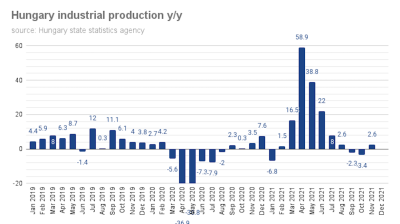 Hungary's industrial output rose 2.6% y/y in November, up after two straight months of declines, according to preliminary data from the Central Statistics Office (KSH) on January 7. On a monthly basis, output was up by a seasonally- and workday-adjusted 2.9%.

The output of the automotive sector, which has the biggest weight in manufacturing in Hungary, fell considerably as companies scaled back production because of the global chip shortage, KSH said. Detailed figures will be released next week.

Hungary’s industry recovered quickly after the big drop in spring 2020, but then supply problems began to weigh on the two biggest sectors. The automotive and electronics sectors accounted for 40% of the production volume.

The output of the computer, electronics and optical equipment segment "declined by a smaller degree", while output of "most manufacturing branches", including the food, drink and tobacco segment, "grew significantly", it added. Adjusted for the number of workdays, output rose 2.1%.

Hungary's two most important manufacturing segments – automotive and computer, electronics and optical equipment – are still struggling with shortages, but their poor performance seems to have been offset by a combination of other branches of the manufacturing sector.

As supply problems are unlikely to go away before H2, car and electronics manufacturing will remain a drag on growth in Q4.

The automotive industry has a huge order backlog, but could rebound swiftly if supplier problems are resolved.

Supply problems could have shaved off some 2-3pp off the sector's performance in 2021 to around 10%. Full-year industrial output could grow 10% in 2022 and 5-6% next year on base effects and new capacities starting up, according to Takarekbank.