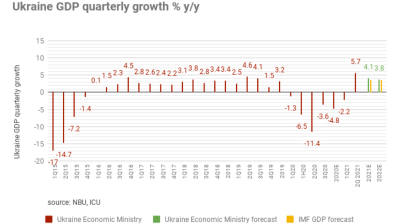 Ukraine's economic growth is slowing as the low base effects from last year's crisis wear off. Growth this year is now expected to be 3.5%, down from its April prediction of 4%.
By bne IntelliNews October 14, 2021

The International Monetary Fund (IMF) downgraded Ukraine’s economic forecast for 2021 to 3.5% GDP growth from 4% in its April prognosis, according to the IMF’s World Economic Outlook (WEO) released on October 12.

As bne IntelliNews reported, after an initial bounce-back the Ukrainian economy has been cooling recently as the low base effect of last year’s lockdown wear off.

Evgeniya Akhtyrko of Concorde Capital said in a note: “Apparently, the very slow revival of Ukraine’s manufacturing is the major reason for the IMF's revision of Ukraine’s GDP outlook for 2021. The revisions of consumer inflation and the current account balance are in line with current developments. The expected stability of the hryvnia’s exchange rate is a good sign, as this has been a major concern of international investors for years.”

However, the IMF is more optimistic about 2022, when it says it expects growth to increase from its 3.4% estimate in the April report to 3.6% growth in 2022, according to the latest forecast.

But the country has several sticky problems to solve. In 2020, the Ukrainian economy contracted by 4% with an average annual inflation of 2.7%.

Inflation in Ukraine has taken off since then, accelerating to 11.0% year on year in September from 10.2% in the previous month, driven mostly by food and clothing prices, the State Statistics Service reported on October 8. Ukraine’s consumer prices increased 1.2% month on month in September after declining 0.2% m/m in August.

The IMF has also upped its forecast for the full-year average inflation number from 7.9% to 9.5%, reflecting the fact that the National Bank of Ukraine (NBU) has been unable to curb inflation despite the regulator’s optimism in the summer months. The IMF said it expects Ukraine to finish this year with inflation at 10.2%, slightly off the current 11%.

Industrial production has also slowed following a surge in the first quarter due to the low base effects. Ukraine’s industrial output increased 0.6% y/y in August, accelerating from 0.2% y/y growth in July, the State Statistics Service reported on September 22.

“The post-crisis recovery of Ukraine’s industry is very slow. Iron ore production is in decline again, as global markets for this commodity are not booming anymore. The upsurge in metallurgy is slowing amid stabilised external demand,” Evgeniya Akhtyrko of Concorde Capital said in a note. “We don’t see the factors which could help Ukraine’s industrial production to accelerate through the end of the year. We expect Ukraine’s industrial output to increase 1.5% y/y in 2021 (vs. 4.5% y/y decline in 2020).”

The IMF predictions are significantly worse than the Ukrainian government’s official forecasts. Ukraine’s Ministry of Economy expects GDP growth of 4.1% this year and the NBU predicts 3.8% growth of GDP.

According to the IMF’s new estimates, Ukraine's current account deficit is expected to be 0.7% of GDP this year, and will deepen to 2.4% of GDP next year, while in April the current account surplus was projected at 0.8% of GDP for 2021 and 0.9% for 2022.

Can Russia cut off gas supplies to Europe?