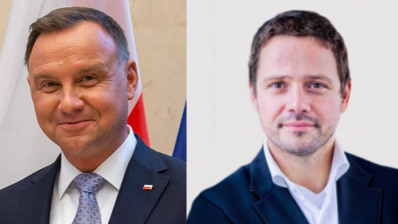 The race was too close to call, Ipsos noted. The exit poll had a 2pp margin of error, it said.

Duda won 50.4% of the vote versus Trzaskowski’s 49.6%, the exit poll showed. Turnout was a record 69.8%. A late poll is expected shortly after midnight on Monday. With so little separating the two rivals, the outcome may not be clear until the official results are announced on Monday or Tuesday.

A victory for Duda would cement the grip of Law and Justice (PiS) – of which the president is a staunch ally - on power in Poland until 2023, the year of the next general election.

But Poland’s biggest cities could still tilt the result in Trzaskowski’s favour. The centre-right mayor of Warsaw is the favourite with urbanites and the results from Warsaw and other big cities typically only come in the early hours of Monday or later.

Trzaskowski’s win would kick off a wholly new era in Polish politics. PiS does not have a majority in the lower house of the parliament to overturn vetoes of an opposition president. That might lead to a snap election or push the party’s chairman Jaroslaw Kaczynski to lure smaller opposition parties to join the PiS-led coalition.

“Winning presidential election with a turnout of almost 70% is incredible. I am very moved,” Duda said in reaction to exit poll results at an event in the town of Pultusk. He noted, however, that the result was just a poll.

“I am absolutely convinced that we are going to win,” said Trzaskowski at his campaign-ending event in Warsaw.