Inflation in Moldova advances to 4.6% y/y as of August 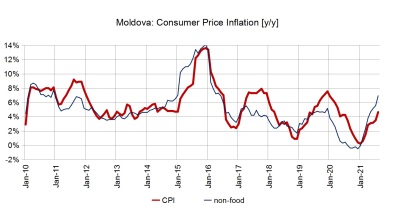 Consumer price inflation increased to 4.6% y/y in August, up from 3.5% y/y in July, driven by the prices of fuels, construction materials and some food items. Regulated natural gas and electricity prices have decreased — in contrast to the rising global energy prices (notably, however, the country has not launched a decarbonisation programme).

According to the latest round of forecasts, the average annual inflation rate will further increase to peak at 7.6% y/y in September 2022, then ease.

The National Bank of Moldova (BNM) increased the refinancing rate by 1pp to 4.65% at its September 3 monetary board meeting, to fight the demand-side inflationary pressures and the second-round effects of the supply shock amid higher international prices and imported inflation. Another inflationary shock may come from the regulated prices of electricity, natural gas and other utilities that have been kept under control prior to the general elections this summer.

As estimated by the BNM, inflationary pressures will continue in the coming period, "supported by increases in household income (payroll, social assistance, remittances) and rising consumer and mortgage credit volumes in the context of incentive monetary conditions that support consumption to the detriment of saving."

Non-food prices increased well above average, by 6.9% y/y, driven by the 18% y/y rise in the price of fuels. Construction materials prices also advanced sharply, by over 18% y/y.

The prices of services, which in Moldova include electricity and natural gas, edged up by only 1% y/y, as the price of electricity dropped by 9.5% y/y and the price of natural gas by 12.1%. The price of other utilities also dropped by 5.3% y/y. These regulated prices, reduced ahead of the general elections this summer, are expected to rise in the coming period, putting pressure on the overall inflation.

Inflation accelerated driven by food prices, in line with an increase in prices seen across the emerging Europe region.

High inflation continued amid a visible path to economic recovery.

€3.5bn Eurobonds issued in July pushed debt up to RON545.3bn at the end of the month.

Slovak inflation at its highest level since October 2012