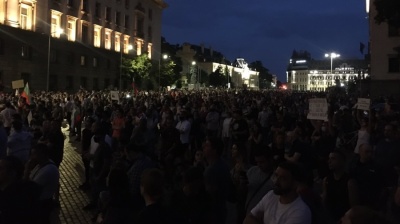 Lacklustre retail and industrial production data for June indicate that the hoped-for recovery in Bulgaria is not yet in sight, ING analysts said in a note on August 10.

New data published by Bulgaria’s National Statistical Institute (NSI) on August 10 show that retail turnover has remained relatively flat, while there was only a modest month-on-month improvement in industrial production.

Preliminary data on retail trade showed that turnover at constant prices inched up by just 0.9% in June compared to the previous month, while it was down by 18.1% compared to the same month of 2019.

Retail turnover increased by a similar amount month on month in May, after deep declines in March and April.

"No matter how we look at it, sales dynamics resemble an L. We’d love to see the 7.2% monthly advance in fuel sales in June as a sign of recovery, but we said the same last month after the 9.5% advance,” commented ING analysts. “Now, with the number of [coronavirus] COVID-19 infections on the rise again and anti-corruption protests still ongoing, the chances for a rebound in consumer morale are rather bleak.” 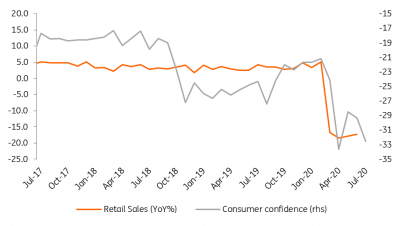 Bulgaria has been racked by nightly mass protests for just over a month now, with protesters demanding the resignations of Prime Minister Boyko Borissov’s government and chief prosecutor Ivan Geshev. In recent days anti-government protesters stepped up their actions, setting up a protest camp in central Sofia and blocking roads. There is no immediate end to the standoff in sight.

Meanwhile, the number of new coronavirus cases has been increasing by around 300 a day for the last few days, having accelerated since the start of the month.

Bulgaria's consumer sentiment improved during the three months to July, yet remained deep in negative territory at -38.5, albeit up from -41.8 in April, statistics office data showed.

Industrial production data, also released by the NSI on August 10, is more positive, with the seasonally adjusted Industrial Production Index rising by 5.8% m/m in June, and declining by only 7.7% year on year. 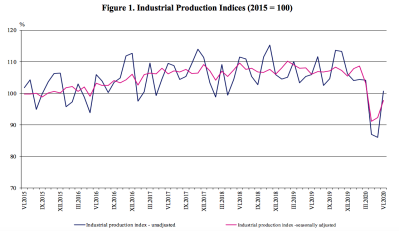 “This might not look impressive compared to the numbers we’ve seen around Europe but bear in mind that, at its low point in April, industry’s monthly contraction was “only” 11.7%,” ING’s note read.

“On the year, total output is still 7.5% below the first six months of 2019, which, by the way, was not a great year for industry. Again, we find some comfort in the stabilising manufacturing sector (+6.0% vs May), which should act as a backstop given its large share in the overall index.”

Overall, however, ING analysts consider the latest retail and industrial data “paints a rather weak picture” in advance of the release of second-quarter GDP figures on August 14. “We have pencilled a 11% contraction compared to the previous quarter, which looks slightly on the optimistic side now,” ING analysts said.

“For the full year, unless 2Q GDP is truly shocking, we believe that the 5.0% contraction forecast still looks realistic given the weak activity data but also the government’s fiscal expansion planned for the second half of 2020. If it wants to achieve its 3.0% of GDP budget deficit target, the government needs to spend the equivalent of around 4.5% of GDP in the last five months of 2020, which will be growth supportive.”

After dynamic production increases to meet pent up demand in May-July, the growth in industrial production in August was well below consensus.

The fall in the gross domestic product (GDP) of Ukraine in April-June 2020 amounted to 11.4% compared to the same period in 2019, the State Statistics Service said on September 18, confirming its preliminary assessment published in the middle of Augu

The Board of the Central Bank of Russia has resolved to maintain the key interest rate flat at 4.25% in its policy meeting of September 18. The economy is doing well, but geopolitical tensions are rising