While wage growth remains strong, there are signs that the unemployment rate is rising. This weakening could be because companies are slowly starting to adapt to their ever-increasing costs by downsizing their workforce.

The Hungarian Central Statistical Office (HCSO) has released the latest set of labour market data (wages and unemployment rate). While wage growth from June suggests that the labour shortage is motivatingn the wage-related decisions of employers, the July employment data may show the first signs of a turnaround.

Starting with wages, gross average wages increased by 15.4% year-on-year in June 2022, causing a minor upside surprise. If we check the development in regular wages (which means getting rid of the impact of one-off payments and bonuses) we can see clearly that underlying wage growth strengthened significantly, with a 16% year-on-year increase. However, despite the strong underlying wage increase, galloping inflation is erasing more and more from the nominal rise. The real wage growth has remained in the positive territory but dropped to only 3.3% year-on-year by June. With the further strong rise in inflation in July and in the coming months, real wage growth could turn into negative territory, dragging on consumption during the second half of 2022. 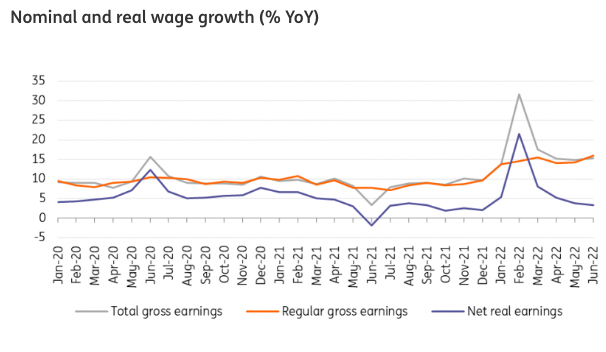 ​Back to the details. Wage growth in the private sector came in at 14.8% YoY, a full percentage point higher than the average seen in the first five months of this year. Salaries rose by 12.8% in the public sector over a year. Meanwhile, due to educational institutions being reclassified as part of the non-profit sector, wage growth here remained on the extreme side: above 32% over a year. In this regard, the main driver of the acceleration in June was coming from private corporates that are still facing labour shortages and trying to solve this issue with higher wages. 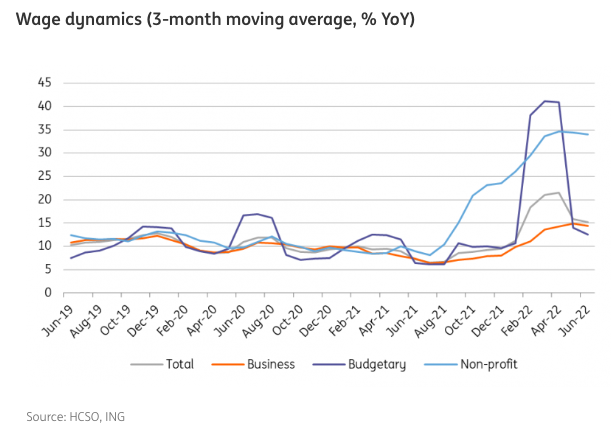 Unemployment rate rises for the first time this year

But this phenomenon could end soon if July data is anything to go by. Employment data points to a weakening in labour metrics. The number of unemployed people moved up to 173k, corresponding to an unemployment rate of 3.5% in July. This is 0.2ppt higher than in the previous month. Although this isn't a ground-breaking change, as it could be a statistical error, this is the first increase in six months.

In addition to the increase in unemployment, the number of participants in the labour market also decreased somewhat. This means that the reduction in the number of employed compared to the previous month was split between going into inactivity (e.g. retirement) and becoming unemployed. Based on one month's data, we can't draw any serious conclusions about major changes in the labour market processes. However, this weakening could be the first sign that companies have slowly started to adapt to their ever-increasing costs. 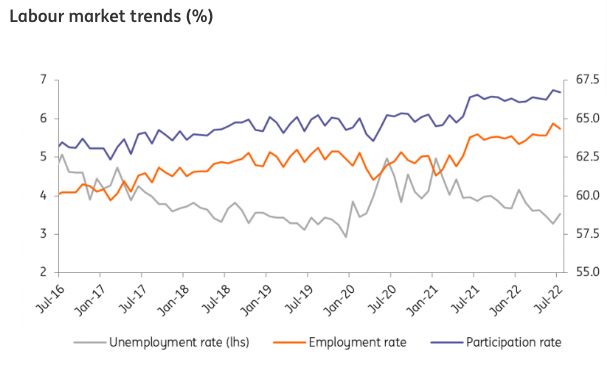 After all, if employers expect more difficult times ahead, and that demand for their products and services will fall, more companies will be forced to start an extensive labour market adjustment. To put it more simply, they could try to save on costs by downsizing and thus maintain their profitability despite the expected decrease in revenues.

Based on our latest outlook, the Hungarian economy is facing a technical recession in the second half of the year, that is, we expect a decrease in aggregate demand. All of this, in addition to the increased costs companies are facing (energy, transport, raw materials, labour, etc.), means ever higher inflation since companies are primarily now trying to maintain their profitability by passing on costs. However, as real wage growth turns into negative and aggregate demand shrinks, this option will become less functional, so layoffs may begin. Accordingly, towards the end of this year, we expect the unemployment rate to rise, but we don’t see the indicator significantly exceeding 4%.