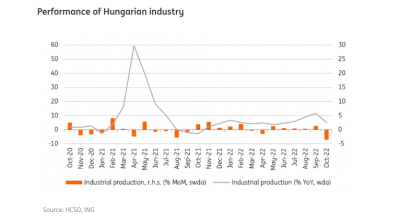 Hungary's economy is feeling the pain of the polycrisis and was off to a bad start in the fourth quarter. / bne IntelliNews
By Peter Virovacz is a Senior Economist with ING in Hungary December 8, 2022

The many economic challenges have begun to surface and become measurable. The performance of industry and retail sales was subpar in October, suggesting a tough fourth quarter.

The Hungarian Central Statistical Office released its latest set of data on retail sales and industry in the past few days. Both brought significant negative surprises despite the already muted expectations. This strengthens our view that Hungary is in a technical recession and facing a significant quarterly drop in real GDP in the fourth quarter after a mild slump seen in the third quarter.

Starting with the latest release, industry has snapped a five-month growth streak. The volume of industrial production dropped by 3.5% month on month in October. This is the worst monthly performance since the Covid shock. Due to a still moderate base from last year, the year-on-year growth rate remained in positive territory, showing a 5.1% increase in output, which takes into consideration the working day effect. 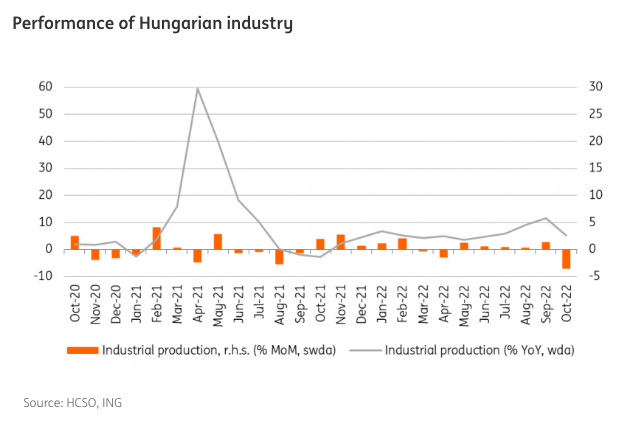 ​The HCSO will present the detailed data on 14 December but in its short note, it emphasised that most subsectors contributed to the yearly expansion of production. The two single most important sectors (car manufacturing and electronics) were able to contribute in a significant and positive manner to the general performance. On the other hand, the food industry (including beverage and tobacco production) showed a y/y slump. Considering this, we think that the majority of the monthly-based decrease in industrial output came from the food sector. This hardly comes as a surprise, considering the sector’s distinctly poor productivity and low resiliency towards the weather, energy and labour-related combination of shocks. 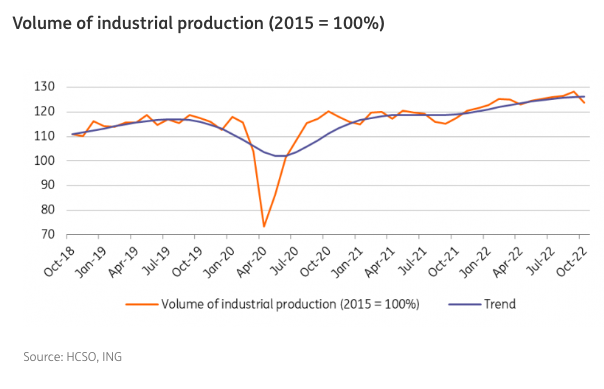 The country’s energy usage also suggests that there might be a significant reduction in subsectors that are energy intensive. The monthly natural gas balance data shows that domestic usage dropped by 23% y/y in October, adjusted for weather. Such a drop can’t come entirely from households, which are responsible for 36% of natural gas usage in general. The power sector and the manufacturing sector eat up roughly 46% of the county’s natural gas usage.

Despite the downturn in October, we remain optimistic about industry's longer-term outlook. Based on detailed data from the previous month, the volume of the industrial stock of orders was 21% higher than a year earlier. Thus if supply shocks don't affect the sector, this could be the engine of the economy in 2023. Or to be more precise, we think industry could be the only significant positive contributor to GDP growth next year. 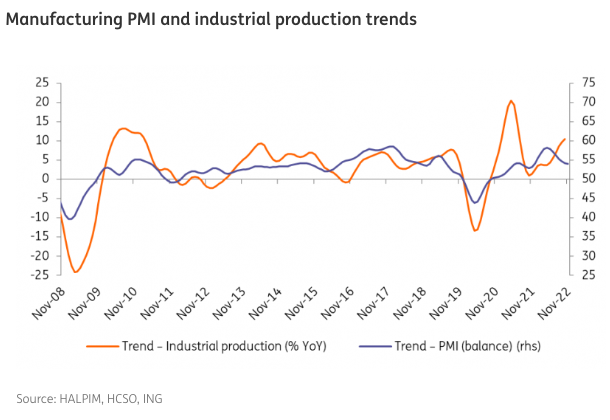 However, in the winter months, the more restrained energy consumption, and problems in the agricultural and food industry, may still result in a negative surprise. At the same time, the purchasing manager's index points to a rebound, considering that the trend is still in expansionary territory (above 50), which once again indicates that the decline seen in October does not necessarily mean a reversal in the trend.

Retail sector is under severe stress

The October retail sales data was a significant downside surprise. In the first month of the fourth quarter, the volume of retail trade shrank by 0.4% in a monthly comparison. This translated into only 0.6% y/y growth. So the retreat of consumption not only continued in October but accelerated further.

When it comes to the details, we can’t see any major surprises, at least not in the m/m developments. On a monthly basis, food retailing has stagnated for the third month in a row. However, on a yearly basis, this shows a 5.6% drop in the volume of turnover. The last time food retailing showed a similarly bad performance was during the Great Recession in 2009. Consumers have been strongly adapting to the new reality of surging food prices. 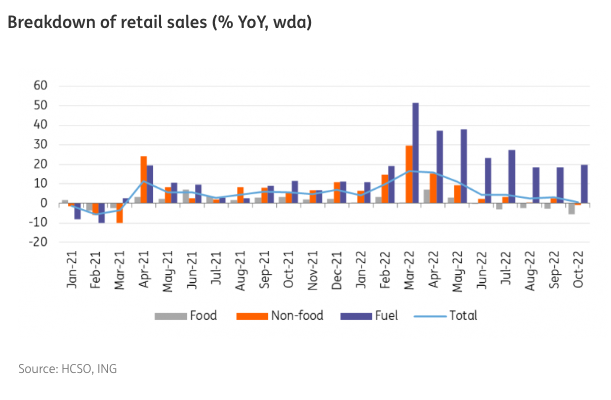 Regarding non-food retailers, we see a similar story as households reduce demand for non-essential goods. Sales volume in non-food stores shrank by 1.9% on a monthly basis causing a 0.9% y/y drop. In the case of fuel retailing, the impact of the fuel price cap was clearly visible in October. In a monthly comparison, the volume of fuel sales grew by 2.0% and demand for fuel is roughly 20% higher than a year ago. 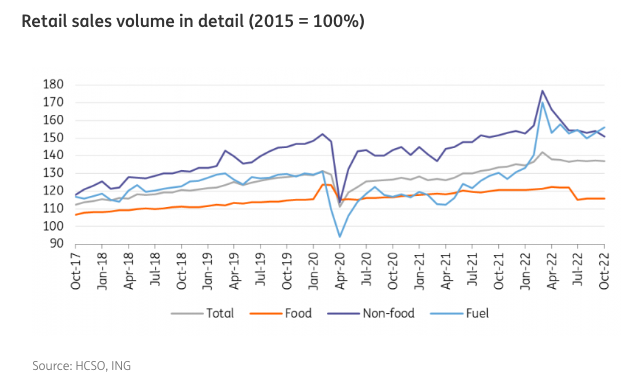 Cheap fuel has generated excess demand and the cap created a supply shock (eliminating imports), which culminated in a fuel crisis in early December. This was a clear boiling point and the government decided to scrap the fuel price cap, reverting to market prices immediately. Petrol prices moved up by 33.5%, while diesel prices skyrocketed by 46%. According to our calculation, this move will generate roughly 2ppt of additional inflation in the headline reading. Two-thirds of it will show up in the December statistics, with the full impact being visible in January, due to methodological reasons. This will push the inflation peak into the 25-26% area during the first quarter of next year. This also means a possible 1.5-2.0ppt of additional inflation in the full year average, pushing it from 16-17% into the 17.5-19.0% range in 2023, in our view.

As real wage growth will drop further into negative territory during the remainder of 2022, we see further weakness in retail sales. As soon as car users adapt to the market prices, this will cut fuel consumption significantly, while extreme food price inflation and the scrapping of non-essential purchases will be a major drag on growth.

Based on the October sectoral hard data, the picture regarding GDP growth has been clearly negative. We expect a significant slump in the retail sector in November-December with further rationalisation in energy-intensive manufacturing during the fourth quarter. With a drop in real GDP during the third quarter, we see Hungary falling into a technical recession during the fourth quarter. A subpar performance at year-end will create a negative carry-over effect, and continuing weakness during the first quarter of next year may well translate into a stagnating economic performance in 2023 as a whole.

Peter Virovacz in the senior economist for Hungary at ING.  This note first appeared on ING’s THINK.ING portal here.

PANNIER: Uzbeks, Kyrgyz cooperating to level unthinkable 10 years ago
5 days ago
PANNIER: A very Turkmen coup
9 days ago
OPINION: Bulgaria sets itself a tough task with Burgas-Alexandroupolis pipeline revival
13 days ago
NEMETHY: Is Ukraine War the beginning of World War III?
13 days ago
RIDDLE: The Russian army in 2023
13 days ago