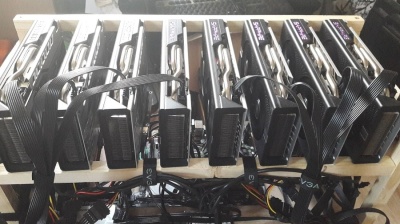 The extent of BitCoin mining in Kazakhstan has been revealed by the country's crisis. Pictured is a crypto mining rig. / Gzen92 CC-BY-SA 4.0
By bne IntelIiNews January 6, 2022

Internet blackouts brought in by the Kazakh authorities to help address Kazakhstan’s spreading unrest reportedly dealt a severe blow to Bitcoin (BTC) cryptocurrency mining activity, with the overall BTC hashrate falling 13.4% from roughly 205,000 petahash per second to 177,330 petahash per second. The Bitcoin price dropped 9% following the Kazakhstan blackouts, dropping to a swing low of $42,642.

Following an exodus last year of crypto miners from China—where their electricity-draining activities were banned—Kazakhstan currently ranks second in the world in terms of BTC mining hashrate, accounting for around 18% of the network’s hash activity.

Jaran Mellerud, a researcher at Arcane Research was quoted as saying by FXStreet that in theory, miners could mine without the internet, “but in practice, all the machines in Kazakhstan should be turned off because of the internet shutdown”.

He added that btc.com estimated that Antpool, Poolin, F2Pool and Binance Pool witnessed massive reductions in their hashrate during the time the internet was shut down in Kazakhstan. He stated that “these are the pools widely used by Kazakh miners.

Larry Cermak, the VP of Research at the Block, tweeted about the drop in hashrate. The Kazakhstan event is unlikely to lead to a decline in crypto prices, he said, adding that “it matters to estimate the impact of an unprecedented event like this.”

Hardware manufacturer Canaan has been looking to expand its crypto mining operations in Kazakhstan. It recently announced that it has deployed over 10,000 AvalonMiner units in the country.

Looking at the impact of the Kazakhstan events on BTC mining, Fortune magazine wrote: "The curtain just lifted on one of the many mysteries surrounding Bitcoin: How much is being produced using super-dirty coal in Kazakhstan. We knew that the Eurasian nation was a major destination for miners, and that the refugees recently expelled from China were flocking there.

"Still, it was difficult to establish how much of all the world's coins Kazakhstan was minting. Clouding the picture was the government's recent moves to severely restrict the mining boom that was plaguing its cities via rolling blackouts."

The birth of a Kazakh banking empire: ATF Bank

Russian e-commerce turnover up 1.5-fold in 1H22
4 days ago
Home of the humbled lira, Turkey’s the biggest cryptocurrency market in the Middle East
4 days ago
Business Insider: Western tech majors have tested or used controversial Russian face recognition technology
10 days ago
From 4G to 6G: How Russia seeks to develop mobile networks amid shortages of domestic frequency and foreign equipment
10 days ago
Should I stay or go for founder of Russian internet major Yandex
14 days ago