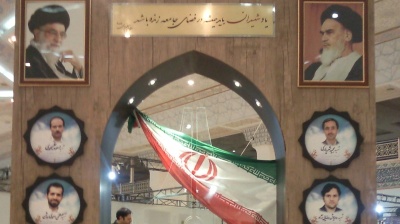 A memorial to murdered scientists of Iran's nuclear programme. Tehran over the years has accused Israel of assassinating Iranian scientists to hinder the country's scientific progress in the nuclear field.
By bne IntelIiNews September 14, 2021

Iran could have enough weapons-grade uranium for an atomic bomb within a month in a “worst-case scenario”, US-based think tank, The Institute for Science and International Security, concluded in a report published on September 14.

However, the report does not address the time it would take Tehran to actually assemble a deliverable bomb that could be installed on a ballistic missile warhead.

Iran could produce enough highly enriched uranium for a second nuclear weapon in three months and a third in five months, according to the report authors, led by former UN nuclear inspector David Albright.

The institute’s experts examined a recent report released by the UN’s nuclear watchdog, the International Atomic Energy Agency (IAEA), on Iran’s compliance with the 2015 nuclear deal, officially known as the Joint Comprehensive Plan of Action (JCPOA). Iran has been gradually abandoning compliance with the multilateral JCPOA since former US president Donald Trump unilaterally exited the accord in May 2018, even though Tehran was at the time in full compliance with its stipulations, and imposed the toughest ever US sanctions on the Iranians. Compliance with the JCPOA is meant to provide the international community with a verifiable assurance that Iran is keeping its nuclear development programme strictly civilian, while in return the major powers are supposed to shield Tehran from heavy sanctions.

“Overall, the IAEA’s latest report shows Iran’s rapidly advancing nuclear activities and steps to limit IAEA monitoring, while inspectors have a diminishing ability to detect Iranian diversion of assets to undeclared facilities,” the think tank report said. “The IAEA is sounding an alarm to the international community accordingly.”

Unnamed US officials have acknowledged to the New York Times that they believe it would take Iran only a few months to develop enough fuel for a bomb.

Call for 'Plan B'

Last month, Israeli Defence Minister Benny Gantz warned that Iran was “only two months away from acquiring the materials necessary for a nuclear weapon,” according to the Times of Israel. Gantz called for the major powers to develop a “Plan B,” including sanctions and the threat of force, should the currently stalled talks aimed at reviving the JCPOA end in failure.

Iran has always claimed that it has never had any ambition to develop a nuclear weapon. The country’s new Raisi government last week reiterated that it has every intention of re-entering the talks on restarting the nuclear deal, though the US, which hopes to rejoin the JCPOA signatories, has become concerned at a perceived dragging of feet.

Bagheri, named deputy foreign minister for political affairs, was a senior negotiator in nuclear talks between Iran and the West under former hardline President Mahmoud Ahmadinejad from 2007 to 2013. He is a relative of Supreme Leader Ayatollah Ali Khamenei.