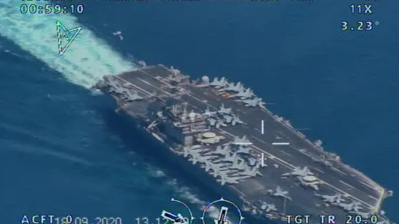 A handout picture released by the official website of the IRGC reportedly shows the USS Nimitz aircraft carrier as it prepares to enter the Strait of Hormuz.
By bne IntelIiNews September 23, 2020

Iran’s Islamic Revolutionary Guard Corps (IRGC) has managed to fly a surveillance drone over the USS Nimitz aircraft carrier which last week transited through the Strait of Hormuz, the semi-official Tasnim news agency has reported.

Tasnim, considered close to the Guard, on September 23 published images of the Nimitz with fighter planes parked on its deck, saying they were taken by an Iranian-made drone.

The Nimitz, and several other warships in its battle group, last September 18 passed through the Strait of Hormuz, the world’s most important chokepoint for oil shipments, in what the US Navy described as a “scheduled manoeuvre”.

The Associated Press in Tehran said the US Navy’s Bahrain-based 5th Fleet, which oversees patrols in Middle East waters, declined to comment on the Iranian news report.

Separately, on September 23 the IRGC took a delivery of surveillance drones from Iran’s defence industries. At a ceremony marking the event, General Hossein Salami said the power of the IRGC navy stemmed from its combined use of drones, helicopters, aircraft and its vessels.

In 2019, similar images to those put out by Tasnim were published, reportedly from an IRGC drone that flew over the USS Dwight D Eisenhower carrier and another American warship in the Persian Gulf.

Iran says the US sanctions aimed at Iran under the US Trump administration are so extensive and heavy that they amount to economic warfare.

Iranian President reiterated this point in a cabinet meeting on September 23, saying: “We are in a war, we are in an economic war.”

On September 21, Iran’s oil minister, Bijan Zanganeh, said that by imposing sanctions on the Islamic Republic’s crude exports—the stated policy of the US State Department is to use sanctions to try to drive all Iranian oil sales off world export markets—“America has waged a war against Iran with no blood”.

The previous day, Zanganeh called on OPEC members to “denounce the use of oil as a political tool for imposition of sanctions and pressures on oil producing nations”.

Also on September 23, following a delivery of Iranian condensate to fellow US-sanctioned country Venezuela by an Iran-flagged tanker, the same tanker was reportedly loading Venezuelan crude oil at a terminal in the Latin American country, in defiance of US sanctions on both the Iranian and Venezuelan oil industries and their exports.

The tanker currently known as Master Honey offloaded condensate from Iran at the Venezuelan port of Jose earlier this month, Bloomberg reported last week, quoting a source with knowledge of the matter and a shipping report.

Now the tanker, according to the shipping report seen by the news agency, was thought to be preparing to ship Venezuela’s heavy Merey 16 crude grade, helping the country with the world’s largest crude oil reserves to export more of its oil while US sanctions have scared off many buyers, shippers, and insurers from doing business with Venezuela.

Reuters reported Venezuela’s state-run oil company PDVSA was loading the tanker with up to 2mn barrels of Merey 16 after agreeing to sell the shipment to Iran's state-owned National Iranian Oil Company (NIOC).  Three Iranian tankers - the Fortune, Faxon and Forest - were, meanwhile, crossing the Atlantic Ocean on their way to Venezuela, according to Eikon data cited by the news agency, carrying gasoline to help ease an acute scarcity that has kept Venezuelans lining up in front of gas stations waiting for fuel. The same vessels and two additional Iranian tankers delivered gasoline and other fuel to PDVSA between May and June, while the South American nation shipped a cargo vessel carrying alumina to Iran’s Bandar Abbas port.

Iran has sent experts to help Venezuela repair its crumbling refineries and has been sending the country the superlight crude grade known as condensate to blend it with heavy crude to produce exportable grades of crude oil.

Venezuela’s refineries have been crippled by US sanctions and the country’s economic crisis that have left them unable to source supplies needed for refining or meet repair and maintenance requirements.

Nagorno-Karabakh ceasefire brokered by US frays after minutes

It took just minutes for the third attempt at a humanitarian ceasefire in the Nagorno-Karabakh conflict to fray on October 26, with Armenia and Azerbaijan accusing each other of violating the truce ... more

On the eve of talks in Washington, there was little optimism in evidence on October 22 that the near-month-long Nagorno-Karabakh conflict between Armenia and Azerbaijan could be ended any time soon. ... ... more

It was Iran’s Supreme Leader Ali Khamenei who last week directly ordered Iraqi armed factions to halt their attacks on US interests after taking advice from the UK, Middle East Eye (MEE) said in an ... more