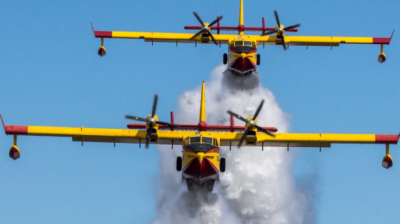 Spanish firefighting planes as pictured by a social media user who responded to the #HelpTurkey hashtag with a message saying "Spain is a country that always offers its help, we were not going to leave Turkey, the pilots of these planes are our pride." / @bea_sck, twitter.
By bne IntelIiNews August 2, 2021

Turkish leader Recep Tayyip Erdogan is having a rather bad crisis.

It took on a tragi-comic air over the weekend when the president came under fire for tossing bags of tea from a bus to locals while, under heavy police escort, touring one of the regions most badly affected by the infernos raging across Turkey. 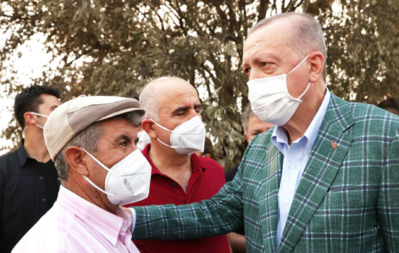 Erdogan in Mugla province meeting victims of the fires. During the visit he made the claim that "Turkey has the strongest infrastructure in the region in terms of combatting forest fires" (Image: Turkish Presidency).

That incident was picked up by AFP, which also on August 2 reported: “The wildfires tearing through the resort regions of Turkey's Mediterranean and Aegean coasts have destroyed huge swathes of pristine forest and forced the evacuation of panicked tourists from their hotels.

“But they have also exposed Erdogan—facing an election in two years that could extend his rule into a third decade—to a new round of criticism over his seemingly sluggish and out-of-touch response.”

Prior to the tea tossing episode—to the farmers who’ve lost their livestock to the flames and the locals who’ve seen their homes razed to the ground, it really won’t have come across as a storm in a teacup—Erdogan was hit by heavy criticism when it was revealed that Turkey has no firefighting aircraft. This is quite incredible in a country that is one-third forest and suffers wildfires—though not on this summer’s scale—on a yearly basis.

Erdogan tried to explain the omission away by saying "the main reason for these issues with planes is that the Turkish Aeronautical Association has not been able to update its fleet and technology". It turned out that the association was unable to enter tenders to provide the aircraft because the water tanks on its proposed fleet were slightly too small.

Firefighting planes were eventually brought in from Azerbaijan, Iran, Russia and Ukraine and, by August 2, the European Union had responded “in full solidarity” to an international appeal from Ankara for more aircraft. Turkish Foreign Minister Mevlut Cavusoglu thanked Brussels for sending a plane from Croatia and two from Spain.

At the same time, however, Erdogan’s communications director Fahrettin Altun was displaying a remarkably tone deaf approach to the crisis by reacting with pompous annoyance to social media hashtags #HelpTurkey and #GlobalCall. "The so-called aid campaign has been launched to make our state look incapable," responded Altun.

The translation might be a bit wonky here, but alleging that most information shared on social media platforms, instant messaging groups and forums is fake news, Altun reportedly griped: "Every good-intentioned aid and contribution is required by our national unison. However, this so-called aid campaign that was organised from abroad and from a single centre as of this evening has been launched with ideological motives and aimed at making our state look incapable and undermining our state-nation unison."