Istanbul Municipality receives approval to sell up to €554mn of eurobonds 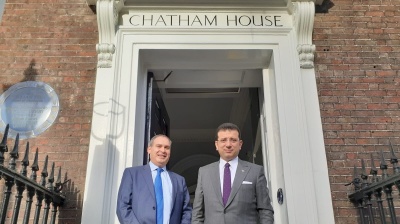 In 1854, the Turks sold their first eurobonds in London. £3mn of 33-year papers were priced at 80%, raising £2.3mn when commissions and fees were excluded. The papers were supposed to pay a 6% coupon but the Ottoman state defaulted. Pictured is Istanbul mayor Ekrem Imamoglu (r) at Chatham House.
By bne IntelIiNews October 23, 2020

The Capital Markets Board of Turkey (SPK) has approved Istanbul Municipality’s application to sell up to €554mn of eurobonds, the SPK said on October 22 in its weekly bulletin.

Also on October 22, Bloomberg reported that the municipality was in talks with banks to sell at least $500mn of eurobonds.

This month, the Turkish Treasury agreed to pay a 609bp spread over US Treasury papers for 5-year $2.5bn papers and Turkish biscuit and confectionery maker Ulker agreed a 660bp spread for 5-year $650mn papers.

“Two EM bond issuers [TWF and Ukraine’s Naftogaz] beat hasty retreats from the primary market this week. But despite the challenges the pair faced, bankers and investors believe the market is open for borrowers looking to pick up a bit of funding ahead of what is expected to be a tortuous US election,” Global Capital reported on October 22.

The TWF blamed hostile market conditions for its decision, according to the publication.

The Turkish Treasury's last EUR-denominated eurobond sale took place in January 2019. Subsequently, it swapped its USD-denominated papers into EUR to benefit from lower costs. At least that was the case until the latest auction earlier this month.

UzAuto Motors is considering a $300mn eurobond issue, according to data published on Uzbekistan’s Unified Portal of Corporate Information on October 30. “We are pleased to inform that UzAuto ... more

The latest sanctions imposed on Iran by the Trump administration—said by Tehran to be so ... more