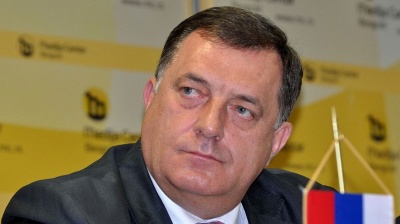 The leaders of Bosnia & Herzegovina's three main parties have reached a deal to form a state-level government, ending a 10-month political crisis.

Bosnia held a general election in October 2018 but since then the main political parties have been unable to form a ruling coalition mainly due to differences in their ideas for the country’s Nato membership.

However, after months of tense negotiations, the leaders of the three main ethnic parties – Bakir Izetbegovic of the Bosniak Party of Democratic Action (SDA), Milorad Dodik of the Serb Alliance of Independent Social Democrats (SNSD) and Dragan Covic of the Croatian Democratic Union (HDZ) – have reached a compromise and pledged to form a government within a month, SDA said in a statement.

“To keep the necessary momentum, we expect the political leadership in Bosnia and Herzegovina to proceed with the formation of authorities and to enable the regular functioning of all institutions without further delay to ensure reform implementation in line with European standards and values,” the EU delegation said in a statement following the signing of the coalition agreement.

According to the deal, Bosnia has committed to Nato membership, although Dodik has fiercely objected to this.

Republika Srpska has been opposing possible membership in Nato and has even adopted a declaration for military neutrality. Dodik is known for his pro-Russian and pro-Serbian aspirations.

Without prejudice
To reach a compromise, the other two parties agreed on a more vague commitment to Nato membership, writing in the declaration they will "promote relations with Nato without prejudicing a future decision about the membership of Bosnia-Herzegovina".

Meanwhile, Izetbegovic told media that the country’s progress along the path towards Nato membership will be slower, without elaborating.

The country has already been implementing a Nato (IPAP) for several years. These agreements are signed for two years and the latest expires in December. At the same time, Nato activated Bosnia's Membership Action Plan (MAP) last year, but the country has failed to move forward owing to Dodik's objections.