Lukashenko postpones state of the nation speech as health fails 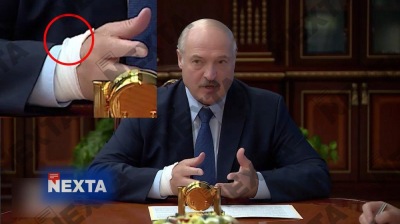 Belarus president Alexander Lukashenko cancelled his annual state of the nation speech a week after he admitted to having the coronavirus
By bne IntelliNews August 3, 2020

Belarus president Alexander Lukashenko postponed his annual state of the nation speech that he was due to deliver on August 3 a week after he admitted to having the coronavirus (COVID-19).

The president boasted that he had been diagnosed with the virus that has spread unchecked through the country last week, but dismissed the virus as inconsequential.

"Today you are meeting a man who managed to survive the coronavirus on his feet. Doctors came to such a conclusion yesterday. Asymptomatic... No-one will die from coronavirus in our country. I am saying this in public. This is my firm conviction judging by analysis not only of previous years…Almost 97% of Belarusians have been infected,” Lukashenko said during a televised government meeting.

However, it now appears the president’s health has suffered more than he first thought. He appeared at another meeting last week with a catheter visible in one arm and complained he was “hot” during the meeting.

The speech was an important one, delayed from April when he normally gives the state of the nation speech. He was hoping to use it as a platform to counter the growing momentum of former housewife and now leading opposition candidate Svetlana Tikhanovskaya’s campaign that continued over the weekend ahead of the August 9 presidential election.

Thousand continue to flock to the opposition rallies

Energised by a rally of 63,000 people in Minsk last week, Tikhanovskaya, the remaining candidate of Belarusian opposition in the presidential election, has gained momentum, attracting larger than expected crowds of her supporters in a string of smaller Belarusian towns over the weekend.

In Brest an estimated 20,000 supporters turned out to her speak, the biggest political rally in the history of the city and the second largest rally in the country after last week’s rally in Minsk.

“The rally of #Tsikhanouskaya has just started in #Brest, but thousands of people already gathered. It is the day of airborne troops today, so I saw at least a dozen of VDVshniki, who came out. They told me that they want change and that 26 years of #Lukashenko is enough,” tweeted Liubakova.

In another rally over weekend at Baranavichy a crowd of 7,400 turned out welcoming Tikhanovskaya with bread and salt, a traditional greeting to those moving into a new house.

At some of the rallies over the weekend protests carried posters in support of the anti-Putin protests underway in the Russian far eastern city of Khabarovsk that are now in their third week.

On the morning of August 1, Svetlana Tikhanovskaya appeared in Grodno near the Belarusian-Lithuanian border, where she gave a passionate speech to a couple of thousand of her supporters. Some of the attended admitted to Grodno media they had showed up out of curiosity for the woman, who has already been dubbed Belarus’ Joan of Arc after a heroine of France in the 15th century.

The crowd  paid little attention to a man holding a portrait of the incumbent president Lukashenko and shouting out that the support for the president seeking his sixth term is nowhere near the 3%, which some opposition virtual outlets claim.

“The man was in the first row and nobody from the cheering crowd asked him to leave,” Hanna Liubakova, a broadcast journalist and researcher from Belarus, tweeted.

Her next stop on August 1 was Mozyr, a city in Gomel Region of Belarus on the Pripyat River with the population of around 110,000 people, where over 100,000 Mozyrians came out to listen to her.

The campaign then moved onto the towns of Kletsk, Novogrudok, Krichev and Rossony, which also saw large turnouts. The numbers being mentioned by some of activists of her campaign, such as Tadeusz Giczan, were the following: 11,000, 29,000, 27,000 and 4,000.

“It feels like she has already won!” Giczan tweeted excitedly.

Tikhanovskaya gave an extensive interview to the Russian portal Lenta.ru, where she laid out some more detail on her policy ideas and goals.

Asked if she is a better candidate than Lukashenko, Svetlana Tikhanovskaya answered that she is better just because she will leave the post and will not cling to power indefinitely.

“What I want is to go back to our Constitution of 1994 and hand our people the constitutional rights, like freedom of speech, right for free election, limitation of the presidential terms. So, yes, I’d be a better candidate, as I’d pave way for the changes that our people have been waiting for so long.”

Reminded by the Lenta.ru journalist that she lacks political experience and an impressive election team and that her quest is encumbered by the passiveness of many Belarusians, Tikhanovskaya shot back that the assessment is wrong.

“You are perhaps not following the situation in our country. We were silent, we were obedient, but believe me that we have changed as a nation. We were going many years for this. Our people have been awakened this year. Many factors have contributed to that, but the reality is that self-awareness and self-respect have come back. We started feeling ourselves as a nation…” she said.

Tikhanovskaya continued that if she is elected, she will immediately call fresh parliamentary and presidential elections to allow for a free and fair elections to install a truly democratic government. She has joined forced with the wives of two other banned opposition leaders and they have a practical agenda of getting Lukashenko out of power and then resetting the system to a more democratic mode, rather than having a reform platform of their own.

Over the weekend, she reiterated that, if elected, she will seek good relations with everyone, including Russia. Speaking of the latter, Tikhanovskaya said she will not push for more integration with Russia.

She also said she would strive to promote the Belarusian language, but Russian would be used equally, which she herself uses as her first language.

As reported, Belarus has arrested 33 suspected Russian mercenaries on July 31 believed to be plotting "terrorism" ahead of the country's August 9 presidential election. The suspects are alleged to be part of a shadowy military group, part of which allegedly was Tikhanovskaya’s husband Sergei, who was barred from the election along with ex-banker Viktor Babariko and former Lukashenko aide Valery Tsepkalo. The latter has fled to Russia amid peril to his safety.

Over the weekend, Lukashenka was seemingly downplaying the mercenaries’ alleged plotting of unrests in Belarus, hinting that some of them may have planned Turkey as their final destination. By Monday he admitted that the 200 mercenaries that were supposed to have entered Belarus in addition to the 33 that were arrested were not in the country.

"Lukashenko backs off. He said today that the remaining 170 terrorists "haven't managed to cross the border with Belarus", i.e. don't exist. He also ordered to offer the detained militants better facilities because "they are just soldiers" and was generally super soft and polite," tweeted Tadeusz Giczan.

Belarusian government sees $2bn of withdrawals, issues $580mn worth of bonds in 2020