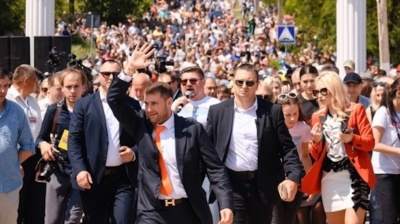 MP and former mayor of Orhei Ilan Shor calls the city the "Monaco of Moldova" as he opens the OrheiLand amusement park.
By Iulian Ernst in Bucharest June 20, 2019

Ilan Shor, a businessman and politician sentenced in connection to Moldova’s $1bn bank frauds, has reportedly sold his duty-free businesses and sent his family abroad after the Democratic Party of Vlad Plahotniuc failed to forge a new coalition and stay in power after the February 24 elections.

Shor was identified by investigators as the “visible beneficiary” of the bank frauds and given a 90-month sentence in June 2017. However, while he waits for his appeal to be judged, Shor managed to be elected first as the mayor of Orhei, and later to the Moldovan parliament in the February 24 general election.

Shor served as a key witness in the lawsuits against two of Plahotnuic’s political rivals, former prime minister Vlad Filat and convicted corporate raider Veaceslav Platon, both of whom are currently serving long prison sentences for fraud.

Shor, meanwhile, has remained at large. The delay of his lawsuit was seen as a result of his cooperation with Plahotniuc. His party, the Shor Party, won seven seats in the recent election and was considered a potential partner to the Democratic Party.

However, Plahotnuic’s hopes of holding onto power were dashed recently when the pro-Russian Socialist Party and the pro-EU ACUM alliance teamed up in an unlikely partnership aimed at ousting Plahotnuic.

Rumours about Shor leaving the country have circulated since the formation of the new majority in Chisinau, though they were recently denied by Interior Minister Andrei Nastase. However, Shor’s family are believed to have left the country.

Plahotniuc has already left Moldova with his family "to protect himself", moving the day before his cabinet headed by Pavel Filip resigned.

Meanwhile, the fate of the Dufremol chain of duty-free shops owned by the Shor family is uncertain. Until recently the largest duty-free chain in Moldova, the shops have been the core of the Shor family’s visible assets ever since Ilan Shor’s father arrived in Moldova in the early 1990s.

Until April, the company was registered on the name of Shor’s mother, Ilona Shor. However, the chain is currently reported as controlled by Bulgarian citizen Todor Markov Stefanov, Mold Street reported.

Ilan Shor’s other company, DFM which also specialises in duty-free trade, is active and its webpage claims that it operates the largest duty-free chain in the country. The associates are declared to be Alexandru Vilcu (30%), Viktor Iakovlev (30%) and Andriy Minayev (40%). Vilcu is a local businessman, the son of the Custom Agency’s head during the communist government.

Remittances to Moldova spike in May amid lockdown relaxation in Europe

Ukraine cancelled a planned offering of dollar-denominated Eurobonds after Yakiv Smolii stepped down as NBU governor citing a “systematic” campaign against the central bank.

Stefan Gatcan fled the country after telling prosecutors he was physically forced to sign his resignation as an MP by his former colleagues from the Socialist Party.

Yakiv Smolii, the governor of the National Bank of Ukraine (NBU), has quit his job, citing pressure from a “systematic” campaign against him and the central bank by oligarch Ihor Kolomoisky.

Russian vote through changes to constitution in referendum, Putin cleared to rule until 2036

German auto giant says it can no longer see demand for proposed factory’s output. Ankara tells EU travel and coronavirus officials to correct their “mistake” as soon as possible.

BREAKING: Ukraine cancels dollar bond sale after NBU governor resigns
5 hours ago
Moldova’s ruling Socialists accused of “abducting” MP after he defected to Pro Moldova
7 hours ago
Ukraine’s NBU governor Smolii quits under pressure from oligarchs
16 hours ago
Russian vote through changes to constitution in referendum, Putin cleared to rule until 2036
8 hours ago
Turkey hit by VW’s scrapping of auto plant plan and refusal by Europe to list country as safe for tourism
13 hours ago