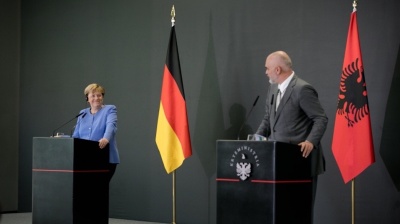 German Chancellor Angela Merkel talked of the need for the EU to keep its word in relations with the accession candidates from the Western Balkan states during her visit to the Albania capital Tirana on September 14.

Merkel arrived in Tirana after her visit to Belgrade the previous day as she continued a farewell tour of the EU-aspiring region. She reiterated the point made on September 13 that the EU has a geostrategic interest in bringing the Western Balkan countries into the bloc, but acknowledged the difficulties in advancing Albania and North Macedonia towards accession.

“ Albania and North Macedonia, both have reached a state where we can start accession negotiations and hold the accession conference,” the chancellor said. “Unfortunately, we did not succeed in doing this during the German Council Presidency because there was an objection from a member state, namely Bulgaria, with regard to North Macedonia. But we discussed that it is imperative that we hold on in order for the accession process to move forward. Because a lot of effort and effort has been put into this process.”

The hopes in both Albania and North Macedonia of moving forward to EU accession negotiations were dashed at the end of last year, when Bulgaria blocked the start of talks with North Macedonia. This affected Albania too, as its progress is coupled with that of its neighbour.

At a joint press conference with Albanian Prime Minister Edi Rama, Merkel said that she had discussed the issue “very openly”.

Merkel added that the EU should stick to its word when dealing with the accession candidates. “If I take Albania as an example, we have said very clearly what needs to be changed in the legal system and what needs to be changed in other areas. But if the conditions are met, then the EU must keep its word and not always come up with new conditions because it has no desire – perhaps for domestic political reasons in some countries – to push ahead with the accession process. That creates disappointment, and I understand the disappointment because then national issues keep coming to the fore.”

Commenting on the prospects of future progress, she added: “I have good hope – we already worked very hard during the German presidency and discussions have now continued. Charles Michel, as President of the Council, is also trying to speak to Bulgaria. Bulgaria is currently in an electoral phase and there is no active government.”

Rama also commented on the issue, expressing some of the frustration governments from the region felt when the two countries were unable to progress.

“[T]oday we are, so to speak, a hostage to the nationalism of the countries of Europe,” said Rama. “There is no nationalist government in Europe, but in some countries the nationalists and right-wing extremists influence the decisions of the governments. What is happening today is the integration process being taken hostage by the nationalist spirit in a particular country.”

The two politicians also talked of the progress made since the launch of the Berlin Process, initiated by Merkel in 2014 to encourage regional co-operation in the Western Balkans.

Talking of the impact of the process, Merkel pointed to her discussion over lunch with all six heads of government of the states of the Western Balkans as an example of how relations in the region have improved.

“Communication prevails. You talk to each other, you meet normally. That was not a special event today, but such events happen all the time. There was no such thing in the past … the overall co-operation has also been greatly increased, be it in civil society, in youth exchanges or in the field of science. We have just spoken again about the important transnational infrastructure projects, some of which are progressing very slowly, but where we can now see the first steps,” she commented.

“I think we should look at the whole process in a historical context. When the Federal Chancellor invited us to Berlin in 2014, it was the first time in the history of this region that we received such an invitation. All the heads of state in this region met and sat around a table to talk about the future – not to beat or butcher each other,” said Rama on the same theme.

“This process paved the way for communication between Serbia and Albania with the aim of regional development, and this against the historical background that the heads of state never met,” he added, though acknowledging that “the mechanisms that are being set in motion with regard to economic projects are running a little slowly”.

Rama also said he believed that while states from the region are waiting to join the EU they should pursue regional co-operation. “We cannot wait to join the EU first and then build our highways, our infrastructure or our digital infrastructure. No, we shouldn't wait for that. We should also build our common regional market. We can start now.”

US charges Iran operative with plotting to kill former Trump hawk John Bolton
29 minutes ago
Ukraine will receive $5.5bn in support from the US later this month
15 hours ago
John Malkovich to turn Skopje into Hollywood of the Balkans
15 hours ago
Envoy says start made on construction of Turkish attack drone factory in Ukraine
1 day ago
Huge explosion rocks Russian airbase on the Crimean peninsula
1 day ago