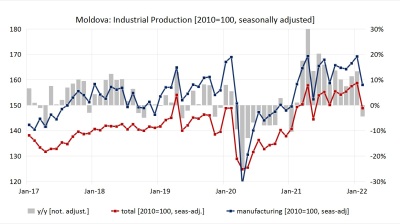 The slowdown should in principle reflect rising energy prices, while the effects of the war in Ukraine are still to come. However, the major effects on Moldova’s industrial activity, as of February, seem to come from the disruption of the global production chains, mainly in the automotive industry.

While the soaring energy prices are deteriorating companies’ profits, the factories that supply parts to European car makers were the first to reduce their output, in February.

In contrast, the output of the metallurgical sector increased by 4.3% y/y (-3.5% m/m), although it should have been among the most sensitive to the rising energy prices.

Separately, the manufacturing of pharmaceuticals contracted by 29% m/m (-26% y/y).

Moldova’s industry had recovered quickly from the COVID-19 crisis suffered in 2019, and by February 2021 the production indices were already in line with the pre-crisis levels. The advance continued until January this year.

But the outlook has visibly deteriorated after the war emerged in Ukraine, not necessarily because of its proximity, but rather as an effect of the slower growth in Europe. The shock of the high energy prices is expected to produce some changes in the structure of the country’s industry as well. But given Moldova’s lack of domestic energy resources, there were no energy-intensive industries developed and the impact will be seen rather in terms of prices and profit margins.

The inflation expectations of the Russian population fell 6pp in March to 12.5%, as consumers feel the relief of the rapid stabilisation of the economy thanks to the fast action of the Central Bank of Russia.

Russia’s CBR reserves down $43.7bn since the start of the war

Russia’s gross international reserves (GIR) held by the Central Bank of Russia (CBR) have fallen from $629.4bn on February 25 to $585.7bn as of May 13, a fall of $43.7bn according to the latest data released by the regulator.

The industrial price inflation in April was the second-highest since last November when Gazprom began charging much higher prices under a new contract.

The volume of construction works in Romania increased by 6.5% y/y in the first quarter of 2022.

Trust in TV news is declining among Russians, as social media news gains popularity. At the same time, Russian support for the war in Ukraine appears to be slipping, as does the belief that Russia is winning a global power struggle.