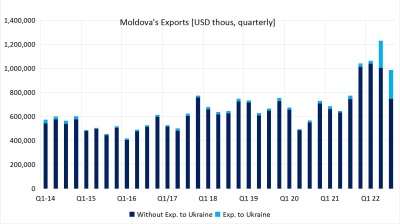 The country’s trade balance came under strong pressure from high energy prices, as Moldova has hardly any primary energy resources, and an adverse farming year, as the country’s exports depend on cereals, oilseeds and fruits.

Thus, Moldova’s trade gap in Q3 exceeded by some 50% the highest quarterly deficit posted by the country so far (€930mn in Q4 last year). In the first three quarters of the year, the trade gap ballooned by one-third to nearly €3.3bn, roughly a quarter of the country's annual GDP.

On the upside, the country receives significant volumes of grants and loans to finance part of the gap that is generated by the import of natural gas, petroleum products and electricity at high prices currently prevailing in the regional market. As of November 11, the official reserves of the National Bank of Moldova rose to $4.36bn, more than $1bn higher than they were in May.

The value of exports increased sharply this year — by 75% y/y to €3.1bn in January-September. The steepest growth rates were posted during the first half of the year, particularly in Q2 when the value of Moldova’s exports more than doubled.

This was, however, the effect of the re-export of goods to Ukraine and high grain prices combined with robust crop last year. But, the effects of the exports to Ukraine excluded, Moldova’s exports remained steady in Q3 compared to the same period of 2021.