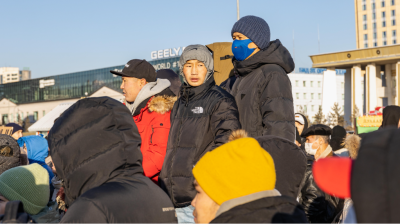 Crowds on the fifth day of protests braved sub-zero temperatures as low as minus-19 degrees Celsius. / Anand Tumurtogoo
By Anand Tumurtogoo in Ulaanbaatar December 8, 2022

The “coal mafia” demonstrations on December 7 continued in Mongolia for a fifth straight day, with citizens again braving sub-zero temperatures as they called for accountability for the alleged embezzlement of up to Mongolian tughrik (MNT) 44 trillion ($12.8bn) in state coal export revenues.

Nyambaatar Khishgee, minister of justice and internal affairs, addressed a crowd gathered in Ulaanbaatar. He informed the protesters that Gankhuyag Battulga, the former CEO of state-owned coal mining and export company, Erdenes Tavan Tolgoi, members of his family and four other businessmen were arrested on December 6 following house searches.

The minister also revealed that a team from the Independent Authority Against Corruption (IAAC) and the Mongolian Central Intelligence Agency had travelled to South Gobi, where the Erdene Tavan Tolgoi mine is situated. According to a source, approximately 50 people involved in the coal mafia investigation were already on-site at the company headquarters and mine.

The information provided by the minister did not, however, quell the protests. After his speech, the protests noticeably grew. Calls for ministerial resignations were heard.

Some protesters began to circulate around Ulaanbaatar’s central square, Sukhbaatar Square, and government buildings, whereas other protesters remained in place in front of Government Palace. Eventually, some protesters began to obstruct traffic around the square. There were reports of a Mercedes Benz G-class car being forced through a crowd. Protestors' white banners obstructed the way through Peace and Chinggis avenues.

The last of the protesters left the square after 10 pm local time, making the fifth day of protests the longest yet. It is expected that the demonstrations will continue into a sixth day.

A public hearing on the coal theft is to be held on December 21.

The fact that huge volumes of coal have allegedly been pilfered in the past decade at least was discovered after officials compared Mongolian export data with import data reported by China, which buys almost all of Mongolia’s coal exports.

Coal accounted for more than half of Mongolia's export revenue in the first 10 months of this year, according to central bank data.

Separately, officials anxious to reassure Mongolians that the country can avoid sinking into a severe economic crisis, have briefed that unpaid debts owed by state companies to the government-owned Development Bank of Mongolia have been resolved, and that the bank was set to repay state-guaranteed bonds.

Mongolia has indicated that the Development Bank is ready to repay a 30-billion yen ($218-mn) state-backed bond. It is due in December next year. Earlier this week, the officials said Mongolia had repaid $136.8mn outstanding on a note due this month.

Could casinos be a jackpot for Mongolia’s struggling economy?