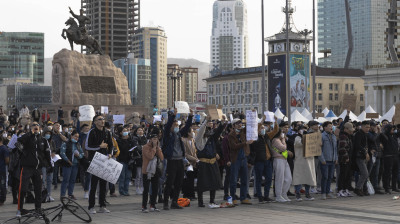 Large numbers of Mongolian youth have mounted a protest demanding that the government address economic hardship and unliveable conditions.

Protesters yelled, "Do your job!" and "You [officials] cut back on your expenses!", the latter slogan being a response to Speaker of Parliament Gombojavyn Zandanshatar, who lately pressed Mongolians to cut back on their expenditures during the current difficult times.

Mongolia is suffering high fuel costs triggered by effects of the war in Ukraine and jammed export channels to China, caused by Beijing’s “Zero covid” policy. Inflation, meanwhile, is on the rise. It is a real headache for Mongolians, who were shocked to see it hit an eye-watering 14% in January.

The rally, held over April 7 and 8, was peaceful, but police used force to arrest some protesters on the evening of the first day, claiming they were intoxicated. The second day saw the size of the protest crowd increase.

Mongolian PM Oyun-Erdene Luvsannamsrai addressed the gathering, attempting to address concerns. "The government will do all in its power to lower the price of meat, rice and flour, and to not cut off medicines and medical supplies, and to keep the price of gasoline stable," he said.
Later that evening, he informed the protesters that he would be proposing legislation to parliament to bring about measures that would ease the current economic dire straits.

The government has said that it will set out to mitigate the negative effects of rising prices and consumer shortages; reinforce the prosecution of corruption and make the availability and awarding of soft loans for small and medium sized businesses more transparent.

Another move is to see the continuation of austerity measures imposed on government personnel in Ulaanbaatar at the height of the pandemic, such as a ban on the use of large vehicles in the capital city and the use of private means for rural travel.

Officials have also said they will address some concerns by having the Mongolian Youth Association's premises and land use probed by law enforcement agencies.

Other issues that the government said it was unable to resolve on an executive basis—including concerns related to social insurance premiums, VAT, international payments, voting machines, and the immunity of members of the State Ikh Khural (parliament)—are to be tackled working with parliament’s leadership and a standing committee in the legislature.