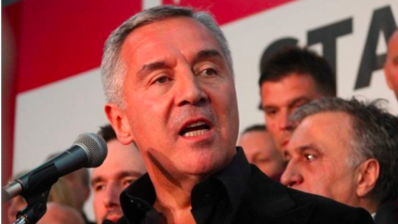 By Valentina Dimitrievska in Skopje October 2, 2018

The outcome of the name deal referendum in Macedonia, which was marked by a mass boycott, should be seen by the EU as an "alarm signal" and “final warning” that enlargement policy needs more serious approach and decisive steps, Montenegrin President Milo Djukanovic said on October 2.

Only 36.9% of the registered voters cast their vote in the September 30 referendum. The opposition in EU-aspiring Macedonia, which boycotted the vote, say the low turnout is a clear sign that most people are against the deal with Greece under which the country’s name would be changed to North Macedonia.

The government is still looking for ways to make the constitutional changes needed for the implementation of the agreement, by seeking the support of the opposition, but this will be more difficult as the low turnout means that less than 50% of eligible voters backed the deal. Macedonian Prime Minister Zoran Zaev will try to persuade VMRO-DPMNE MPs to support the implementation of the agreement in the next ten days. If he fails to do so, Macedonia will hold early general elections, possibly on November 25.

If implemented, the deal will open a chance for the country to become the 30th Nato member and to launch EU accession negotiations next year. Macedonia has been an EU candidate since 2005, but its Euro-Atlantic integration process was blocked by Greece for years, due to the unresolved name dispute.

Djukanovic said at the plenary session of the European Parliament in Strasbourg that the rift between Macedonia and Greece, and the resultant blockage of Macedonia’s EU accession progress, was neglected for years and that the huge Western support — EU countries and the US strongly support the name deal — was not enough to convince more people to vote.

“The referendum was not well prepared. Maybe people in Macedonia did not have enough time to understand the importance of such a significant decision for the country’s future,” the Montenegrin president said in the statement.

Given their common goal of entering the EU, the referendum was watched closely by other countries in the Western Balkans.

Serbian media, for example, wrote following the Macedonian vote that the referendum had been a huge failure, and Djukanovic speculated on the implications for another unresolved conflict, that between Serbia and Kosovo.

“It remains to believe that this will not have a negative impact on the complicated dialogue between Serbia and Kosovo,” Djukanovic added.

According to him, more efforts are needed to ensure that the results will come, as long as there is enthusiasm in Pristina and Belgrade.

Neighbouring Kosovo and Serbia are involved in EU-mediated negotiations to resolve their differences, which is also a condition for both countries to advance in the EU path. Serbia has already launched EU membership talks in 2014, and Kosovo is a potential candidate.

Kosovo declared independence from Serbia in 2008 but it is still not recognised by Belgrade as a state.