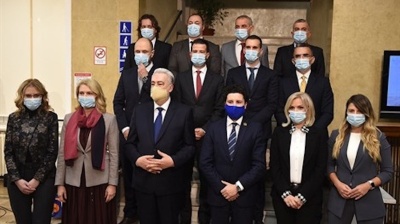 Prime Minister Zdravko Krivokapic's government is mainly technocrats, but the parties behind it say they want the right to appoint ministers.
By Denitsa Koseva in Sofia September 16, 2021

Montenegro’s ruling coalition has split and the government is once again threatened with collapse after two of the three formations issued a joint statement demanding a reshuffle, while the third opposes this move.

Since its formation, the ruling coalition, which comprises 20 political parties united in three large formations, is highly unstable and has been united mainly by one task – to oust from power the Democratic Party of Socialists (DPS), which had ruled the country for over three decades.

Now two of the formations – the largest of the three, the Democratic Front (DF), as well as Democratic Montenegro (Democrats) – issued a joint statement late on September 15, insisting on a reconstruction of the government with the number of ministers being increased to 18 from current 12. They also say Prime Minister Zdravko Krivokapic should have three deputies up from than the current one.

The statement also noted that a prosecutorial council should be elected at the same parliamentary session as when a new, restructured government is elected, claiming this would strengthen the government, solve all political issues and achieve the necessary political stability to would allow further reforms.

The statement angered URA, which said that if the two formations have a majority, they can initiate a session of the parliament on the government reconstruction.

The ruling coalition has 41 out of 81 seats in parliament, which means that, without URA’s four MPs, the two other formations would need support from opposition parties.

“We can see from last night’s statement of the DF and the Democrats that ministerial seats are more important to them than the reforms in the prosecution and the fight against organised crime and corruption. The election of prosecutorial council must not be part of the political calculations of any political entity and reforms in this area cannot be conditioned by anyone’s political appetite,” URA said in a statement as quoted by public broadcaster RTCG.

The move came a few days after Abazovic has threatened to oust the whole government if Krivokapic moves forward with plans to dismiss Interior Minister Sergej Sekulovic and the police chief Zoran Brdjanin. The dismissal of Sekulovic and Brdjanin was demanded by the DF after clashes between protesters and police during the inauguration of the new head of the Serbian Orthodox Church in Montenegro in Cetinje.

Following Abazovic’s threats, the Democrats accused him of hypocrisy and said he should overthrow the prime minister if he dares.

“Be our guest and overthrow the government if you have the guts. Of course, you do not, and you are only bluffing, like many times before,” Democratic Montenegro has said in a press release.

A day later, Abazovic backed off, saying that the stability of the government was not in question and he was only giving a warning.