MOSCOW BLOG: Russia in May 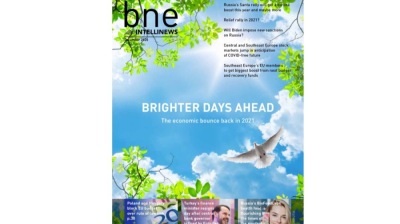 Russia's economy has been recovering faster than expected and the outlook for the rest of the year is good
By Ben Aris in Berlin May 24, 2021

ED: This is the executive summary from bne IntelliNews’ monthly Russia country report, an extensive report wrap of business, economic, finance and politics that follows the slow-moving trends and also includes extensive reporting on sector and leading corporate news from the last month. You can see a sample report here, and if you would like to have a look at this month’s report then please contact sales@intellinews.com and we will send you one. This is a subscription product aimed at businesses and professional investors, but at an affordable price.

Russia’s economy continued to recover in the first three months of this year. Although January and February posted negative growth, the momentum was clearly already growing on the returning optimism as the coronavirus (COVID-19) pandemic recedes.

Growth turned positive in March and the State Statistics Service revised its estimate for the first-quarter growth and improved its reading to a 1.0% year-on-year contraction against the 1.8% y/y contraction in 4Q20.

The mood amongst businesspeople is certainly very buoyant as the Russian business confidence survey run by Rosstat every month has turned positive for the first time in eight years, and for the second time ever. The index was at zero in April, after it was knocked off its feet by last year’s coronacrisis. However, it fell to a low of -7.3 in November, which is less than the -8 of the previous two years. Its fall had been offset to an extent by the appearance of the first vaccines to counter the coronavirus (COVID-19) pandemic. The only other time the index has been positive was for eight months during the height of the noughties boom in 2006 and 2007, before the 2008 crisis knocked the index back to its all-time low of -20.

The story is playing out more or less as bne IntelliNews speculated it would in our cover story “Brighter Days Ahead” in December, which argued that as the pandemic recedes, following the start of vaccine production in November, the release of the pent-up demand would provide a strong positive jolt to economies around the world and lift all the boats simultaneously as soon as the first quarter of this year.

But Russia is not out of the woods yet, as real incomes are still in decline and inflation is still a problem. From a slight improvement of 5.5% in April, in May the fast moving indicators ticked up again, suggesting an increase to 5.8%, well above the Central Bank of Russia (CBR) target rate of 4%, which is not going to be regained until next year, according to the experts.

The CBR has already abandoned its easing policy and begun to tighten with two rate hikes in March (25bp) and April (50bp) and is predicted to tighten by another 50bp-75bp over the course of this year. With the cost of stables, especially food, soaring the population’s expectation for higher prices is at a multi-year highs of 14.5%. CBR Governor Elvira Nabiullina is afraid that inflation expectations will become unanchored from reality and that will in itself be inflationary, so she is acting decisively and aggressively now to manage those expectations.

At the macroeconomic level the picture is mixed. The basic sector data showed that the biggest sector declines in 1Q21 had come in industrial production (down 1.3% y/y), retail sales (down 1.6%) and "services to the population" (down 4.3%), while the biggest gains had come in agricultural output (up 0.4%), cargo turnover (up 0.4%), construction (up 0.2%) and wholesale sales (up 4.2%).

At the microeconomic level things are better, with Russian corporates earning their best profits in five years and the bank sector also is earning profits on a par with the pre-crisis 2019 level. Economists estimate that Russia’s economy is already back to 98% of its 2019 level, which was the first year of strong growth following the 2014 oil price shock and devaluation crisis.

Rosstat data shows a faster-than-expected recovery in the two key segments of the Russian economy: the consumer sector and the resource industry that is being driven by a post-crisis commodities boom. In addition to the recovery in oil prices those for things like iron are at a nine-year high and copper prices topped $10,000 per tonne to reach a new all-time high, which is only adding to both revenues and positive sentiment. A cold spring has also seen gas prices in Europe double to over $200 per 1,000 cubic metres, which will boost Gazprom’s bottom line and ensure a 50% of profit dividend payout that had also lifted Russia’s stocks, up 12% YTD at the time of writing.

Budget execution is also good with stronger-than-expected revenue flows not only from oil, which has benefited from prices consistently over $60 a barrel – well above the $42 breakeven price for the budget – but also from non-oil tax collection. March tax collection was up by a third (33%), largely on the low base effect which will confuse all the reporting this year, but revenues will easily cover the extra social spending Russian President Vladimir Putin announced in his State of the Nation speech and analysts say the government could increase spending by even more than promised to give the economy a boost.

Overall, Putin’s package of measures announced will cost the Russian government RUB400bn ($5.2bn) over the next two years, Russia’s Finance Minister Anton Siluanov said after the speech – equivalent to 0.2% of Russia’s GDP per year. With the extra revenues there is also talk of reducing Russia’s borrowing programme this year.

The official forecast for growth this year is 2.9%, and 3% is the consensus guess, but given all the good news coming out in May analysts are already revising up their expectations: BSC GM is predicting growth of 3.3% this year with possible surprises on the upside.

But despite the good news and rising growth forecasts, Russia’s economy is still performing at less than potential and under par. The Ministry of Finance has been in effect running an austerity budget since 2012 and while Putin’s fiscal fortress is complete, making Russia sanction-proof, it has come at the cost of sinking real incomes and less than the necessary levels of investment. The Kremlin’s overriding policy goal going forward is to fix this problem and push the 12 national projects that are supposed to recreate some of the prosperity Russians enjoyed in the noughties. The jury remains out on how well this effort will go.

The new US sanctions on Russian domestic OFZ bond issues imposed on April 15 are due to kick in on June 14, but the MinFin has already almost completed its borrowing programme for 2021 and could stop issuing OFZ completely in June if it wished. However, to keep the markets liquid it will almost certainly continue to issue more OFZs and the ministry is already starting to issue new debt to retire the most expensive debt issued last year during the height of the crisis.

At the same time the ministry tapped the international capital markets with a €1.5bn Eurobond issue the day after Russian Foreign Minister Sergei Lavrov and his US counterpart, Secretary of State Antony Blinken, met in Reykjavik on May 20 in a positive meeting – the first top level meeting between the new Biden administration and the Kremlin. Demand was decent, but the issue was not seen as a knock-out success. The Kremlin seems to be following a policy of continued debt issues partly to keep international investors exposed to Russian debt and so make it more difficult to sanction.

Geopolitical tensions remain the main political issue, but the Biden administration has made it very clear that it wants to wind the confrontation down and is willing to compromise. The main event in May was the US decision not to sanction the operating company that is building the Nord Stream 2 gas pipeline and thus more or less assuring its completion this summer. A State Department official commenting on the decision said that Washington’s relationship with Germany, which wants the pipeline, is more important than its argument with Russia. This decision will go down very well in Moscow and clears the path to constructive talks between Putin and US President Joe Biden, slated to happen in the middle of June. A further de-escalation of tensions will lead to lower borrowing costs and more investment that should act as a tailwind to Russia’s already better than expected economic recovery.

Against the positive news on the international stage, the Kremlin has been ramping up its repression of political opposition groups and the free press on the domestic front ahead of September's Duma election. Jailed anti-corruption activist and opposition politician Alexei Navalny's group has been effectively labelled a terrorist organisation and outlawed. Its members can now not do anything at all without facing heavy prison sentences for participating in “extremist” activities. Likewise, a raft of publications, including Meduza.io and VTimes.ru (a new title set up by the staff of top newspaper Vedomosti, who quit en masse after the Kremlin took the paper over) have both been labelled “foreign agents” that will kill their commercial viability. It seems that after the PR damage done by arresting Navalny the Kremlin feels it has nothing to lose any more, so has taken the opportunity to clean house and close down all possible rivals to its rule.

MOSCOW BLOG: The freedom of the press is under attack in both the east and the west

MOSCOW BLOG: Russian economy starts to turn up but so does inflation