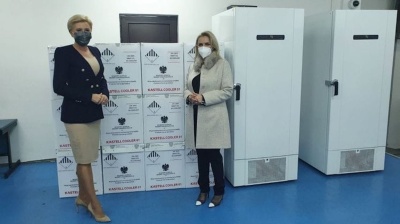 Not long after Southeast Europe emerged from the autumn wave of the pandemic caused by the spread of the Delta variant, cases are already starting to rise again in several countries as the Omicron variant starts to spread in the region.

Albania, Croatia, Montenegro, Serbia, Slovenia and several other countries have all seen an upturn in case numbers in the last few days, after Omicron cases were confirmed in most of the region in December.

There are fears the variant will spread rapidly due to the low vaccination rates in most countries in Southeast Europe, where governments have struggled to convince large swathes of their populations to get vaccinated.

Data compiled by Our World In Data shows that as of January 2, Croatia, Kosovo and Slovenia were the only countries in the region where the share of the population to have received at least one dose of anti-coronavirus vaccinate exceeded 50%. 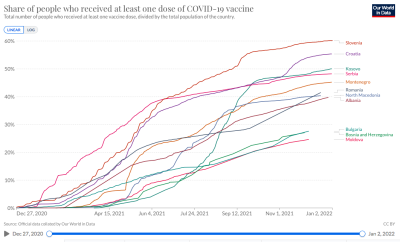 There may also be a spike in cases following New Year celebrations; Serbia in particular saw mass outdoor celebrations attended by tens of thousands of people in cities including Belgrade, Kragujevac and Nis, while an estimated 50,000 people gathered in the ski resort of Zlatibor.

There were no restrictions in North Macedonia during the New Year holidays as the epidemiological situation was stable. Celebrations were allowed in open spaces and café bars and restaurants. However, the country has registered a slight increase of new cases in the last few days with 542 new infections on December 31 and 435 cases on January 1. Previously the daily figure was just over 300. 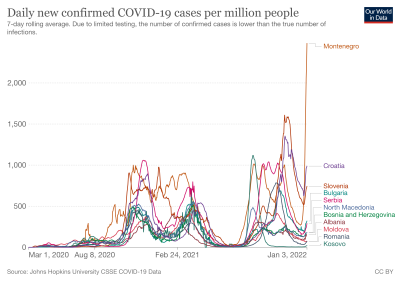 Twice as bad as the fourth wave

Romania reported its first Omicron cases in early December, but nonetheless eased some restrictions a few days later as the overall number of new cases declined.

Previously, the autumn wave of the pandemic had put unbearable pressure on Romanian hospitals and morgues, with neighbouring countries stepping in to offer beds to patients that local hospitals were unable to accommodate.

Romania’s Health Minister Alexandru Rafila warned in an interview with Antena 3 on January 3 that the number of infections in the fifth wave could be twice as high as in the fourth, with daily new cases forecast to peak at 25,000.

Efforts by the Romanian authorities to introduce a COVID-19 pass failed in the face of intense opposition. On December 21, a crowd of protesters against the use of the pass for workplaces forced their way inside the parliament courtyard but were blocked from entering the building.

Bulgaria’s first 12 cases of the Omicron variant were confirmed on January 2 by chief health inspector Angel Kunchev, who warned that a faster spread of the virus can now be expected, and forecast that Omicron will become dominant. Officials are due to meet on January 4 to decide whether to tighten measures in response to the first Omicron cases in the country.

Despite an initial rush to get vaccinated early in 2021, Bulgaria’s vaccination rate is even lower than Romania’s. The government is even offering cash payments to pensioners who get vaccinated.

The Omicron variant has been spreading rapidly in Montenegro, and at the end of December Health Minister Jelena Borovinic-Bojovic said it had already become dominant. Meanwhile, the number of new cases is surging, reaching more than 1,200 per day in the country of just over 620,000 people, or ove 2,200 per million. The healthcare system is already struggling due to the spread of the Omicron strain but officials say it is still able to deal with the situation.

Montenegro’s government introduced new, tougher conditions for people crossing its borders as of January 2. According to the new restrictions, people can enter Montenegro if they have a certificate proving that they have been fully vaccinated with one or two doses no more than six months ago or if they have recovered from coronavirus within the past six months. They will be obliged to also present a negative test for coronavirus along with the certificate.

Montenegrin citizens and foreigners with a temporary permit to live in the country can cross the border without certificates and negative tests but will be obliged to go into a 10-day quarantine. The quarantine can be ended earlier but no sooner than three days after people have a negative PCR test.

The variant is also becoming dominant in Slovenia, where dozens of Omicron infections were confirmed in December. Experts estimate it already accounts for 40% of all cases, STA news agency reported on December 30.

Slovenia opted for only a moderate tightening of coronavirus restrictions before the Christmas holidays amid a persistent fall in cases after the early-autumn surge. The strong fourth wave of coronavirus infections peaked at over 4,000 daily cases in mid-November, but the number has started to decline since then. However, following the Christmas holidays the number of new cases started to increase again, with 843 new infections on January 2.

Kosovo, by contrast, was very quick to act as soon as the Omicron variant started to spread internationally. Pristina adopted a new set of anti-COVID-19 measures on November 30, that came into effect on December 6. They included a curfew between midnight and 5am, while cafe bars and restaurants have to close at 11pm. Wearing a mask for travel was made mandatory, except when driving alone with close family members. It is forbidden to enter an indoor venue without a mask. On January 3, the final measure came into force; entry into Kosovo is allowed only for people who are fully vaccinated for COVID-19.

The strict measures were reflected in much lower numbers of new infections than elsewhere in the region. For part of December, Kosovo was reporting new cases in single figures. In the last few days, the number of new infections has been increasing, but still Kosovo reported only 29 new infections on January 2. To date, 783,074 citizens in the country of 2mn people have been vaccinated with the second dose.

Kosovo registered its first nine cases of the Omicron coronavirus variant on December 26, of which two people came from the US, two from the UK, one from France and four other cases were Kosovars who had not travelled outside the country. According to the health ministry, the Omicron variant may worsen the epidemiological situation in the country following the relatively calm period in the past weeks.

Croatia also acted quickly in response to Omicron, extending anti-epidemic measures in December. The latest data on January 3 showed 1,103 new coronavirus cases in the previous 24 hours, well down on the peak of the autumn wave, but higher than the lows reached in mid-December. On January 4, Croatia also confirmed its first case of flurona, a simultaneous infection with COVID-19 and flu, news agency Hina reported.

North Macedonia has reported only two cases of the Omicron variant so far. The first case was registered on December 23 in a patient who arrived from the UK, but with mild symptoms. On December 30 a second case of Omicron was registered in the country.

Headline inflation hits 13.9% y/y and is still far from peak in Moldova

Who needs a war?
16 hours ago
Outbreak of calm grips Ukraine
17 hours ago
Primark to launch in Romania as it pursues CEE expansion
1 day ago
All eyes fall on Nazarbayev clan’s extraordinary wealth as Kazakhstan’s Tokayev asserts authority by targeting super rich
1 day ago
UniCredit's hopes of acquiring Russia's Otkritie Bank marred by geopolitical tensions
4 days ago