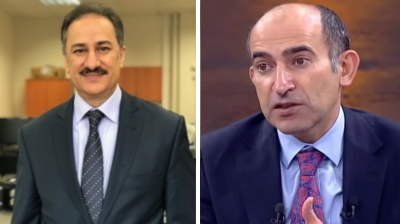 Some observers think Mehmet Naci Inci (left) has been appointed to help implement the Erdogan regime’s plan on dealing with the student protesters. Melih Bulu (right) is said by some to have failed on that score.
By Akin Nazli in Belgrade July 21, 2021

Mehmet Naci Inci, the newly appointed acting rector at Bogazici University in Istanbul, on July 16 dismissed outspoken academic Can Candan after, on the same day, declining to approve autumn semester classes that were to be taught by dissident academic Feyzi Ercin, bianet reported.

The Erdogan regime felt predecessor rector Melih Bulu failed to carry out desired steps, an Erdoganist columnist wrote on July 16, citing unnamed sources. She also referred to “the possibility of the appointment of a harsher, a more hawkish rector”.

Also on July 16, Inci sent an email to the academics at the university from the “Rectorate” account, announcing that he was officially a candidate for the permanent rectorship.

Bulu’s appointment as rector by presidential decree on January 1 sparked protests by students and academics that ran throughout his tenure. Following the dismissal of Bulu, the protests continue. Hundreds have been arrested during the campaign of demonstrations, which spread from from the Bogazici campus grounds to the streets of Istanbul and other big cities.

Turkish President Recep Tayyip Erdogan compared the student protesters with “terrorists” after uproar broke out over his appointment of Bulu. The demonstrators said the method of appointment was undemocratic and against the traditions of the university. Supporters of LGBTQ rights linked up with the movement with controversial protest materials that some critics said offended Islam. That prompted the interior minister, Suleyman Soylu, to refer to the demonstrators as “LGBT deviants”.

Bulu applied to be a candidate for Erdogan’s Justice and Development Party (AKP) in the 2015 parliamentary election. He was the first Bogazici rector chosen from outside a university since a military coup in Turkey in 1980, according to Bogazici faculty members.

It was a decree issued during the state of emergency imposed following the failed coup attempt against Erdogan in July 2016 that granted the president the authority to appoint university rectors.

Erdogan still retains emergency regime powers granted after the attempted putsch was foiled. Turkey’s parliament is set to vote on an omnibus bill that includes measures to extend those powers by three more years.

The powers include the right to dismiss public servants on suspicions of links to terror organisations and the power to hold terror-linked suspects in police custody for up to 12 days without charges.

“The draft bill does not provide any justification for this prolongation,” Ali Yildiz, a human rights lawyer based in Brussels, told Al-Monitor last week. “It is exactly the same provisions which were already extended in 2018." If passed, he said, they "will be in force until July 2024.”

He added, “I don't think the AKP government will ever abandon these powers.”