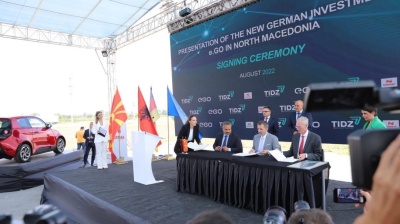 Germany’s Next.e.GO Mobile launched a construction of a plant to produce electric vehicles in Tetovo, North Macedonia, on August 12, the government announced.

Next.e.GO will make an initial investment of €130mn, but Faktor.mk reported that the total value of the project will amount to €720mn. This is the first time a complete car will be produced in North Macedonia and at the same time it will be the first electric car factory in the country. North Macedonia already has several factories producing car parts.

The е-Go car plant will be located in the free industrial zone in northwestern town of Tetovo. Production will be aimed at both domestic and foreign markets.

Prime Minister Dimitar Kovacevski said at the ceremony that in the first stage of the project, the plant will create at least 890 new jobs.

"What makes me particularly happy is that for the first time, a complete car will be produced in our country,” he added.

The same day the company signed an agreement with the government on state aid for the project, as was announced a few days earlier.

“The government gave the consent for granting state aid to Next.e.GO Mobile, based in Aachen, Germany, for a multi-million investment by the company, in the industrial zone in Tetovo,” it said.

“The benefits of this investment are manifold — from the creation of new jobs, export of high added value products, transfer of knowledge and technologies, mapping of the country to foreign investors in this field, to contracts and additional work for local companies,” the government said.

North Macedonia became a Nato member in 2020 and recently launched the long-awaited EU accession talks, which is expected to bring more investors into the country.

On July 28, Next.e.GO announced it agreed to combine its business with Athena Consumer Acquisition Corp., with the combined company expected to be listed on the New York Stock Exchange.