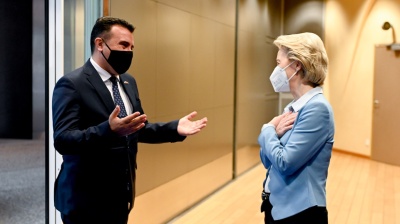 North Macedonia’s PM Zoran Zaev met senior EU officials in Brussels on May 10 seeking to persuade the EU to unblock the country’s EU integration process, which stalled following last year’s veto by Bulgaria on the start of accession negotiations.

The Brussels visit took place after EU Enlargement Commissioner Oliver Varhelyi raised the possibility of decoupling Tirana and Skopje in the EU enlargement process if Skopje fails to solve the bilateral issue with Bulgaria, meaning that Albania could be invited to launch EU talks without North Macedonia, which raised concerns in Skopje. Bulgaria vetoed the start of accession negotiations with North Macedonia at the end of 2020 over a set of linguistic and historical issues.

PM Zaev said in Brussels that the Macedonian language and identity should not be a subject of negotiations and underlined he got assurances that North Macedonia and Albania will jointly continue the EU membership process.

“We are in Brussels to ask for the European path to be unblocked urgently and [to say] that talks on the Macedonian identity are not an option,” Zaev said in a Facebook post.

“The Macedonian language and the Macedonian identity imposed as issues by Bulgaria must not be a topic of talks. This is the only way for North Macedonia to continue the talks about its European future,” Zaev underlined.

“The EU stands by North Macedonia in this difficult time, including by sharing vaccines,” von der Leyen tweeted.

She also said that the country has made steady progress and that the EU looks forward to supporting flagship projects in the field of green energy and transport, through the EU Economic and Investment Plan for the Western Balkans.

According to Zaev, von der Leyen confirmed that the European Commission will be even more involved in seeking a solution for the start of negotiations between North Macedonia and the EU, and expressed commitment that Skopje and Tirana will jointly start negotiations without any further delay.

“Good talks with the PM of North Macedonia Zoran Zaev. We fully support speeding up the accession process and organising the 1st intergovernmental conference as soon as possible,” Sassoli tweeted.

After last week's comments from Varhelyi, ministers from Germany and Slovakia said their countries support plans for North Macedonia and Albania to start EU membership talks together in June.

Turkey, China in firing line as Biden holds summit with Nato allies
6 hours ago
Hungary’s most powerful oligarch says he is just a lightning rod for attacks on Orban
1 day ago
US sanctions on Russia’s OFZ local debt come into force
1 day ago
Moscow back on lockdown as coronavirus infection rate surges again
1 day ago
Lukashenko pushing illegal Iraqi refugees over the border into Lithuania
1 day ago