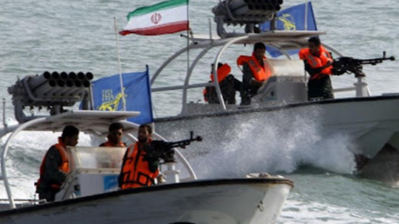 Iranian media carried video footage and pictures of Iran's IRGC navy coming to the aid of a tanker that Iranian officials claimed US forces were attempting to seize for its oil.
By bne IntelIiNews November 3, 2021

Nuclear talks between world powers and Tehran on reviving the 2015 Iran nuclear deal are set to resume in Vienna on November 29 following a five-month hiatus.

The talks—suspended during the Iranian presidential election period that put a hardline administration in office—use a format in which the communication between Iran and the US is indirect, with remaining signatories of the nuclear deal, known as the JCPOA, used as intermediaries. Relations between Washington and Tehran remain badly torn and volatile as was demonstrated on November 3 when US officials rebutted as untrue claims by Iran’s Islamic Revolutionary Guard Corps (IRGC) that they thwarted a US attempt to capture Iranian oil on a tanker in the Sea of Oman.

Reports in Iranian media—published on the eve of the anniversary of the Iranian seizure of the US embassy in Tehran in 1979—said the US navy interdicted an Iranian oil tanker on October 25 with the intention to transfer its oil to a second tanker. The IRGC navy was said to have intervened by boarding and taking control of the first tanker.

“With the timely and authoritative action of the Guards’ naval forces, the US terrorist navy’s operation to steal Iranian oil in the Sea of Oman failed,” the elite Guards said in a statement published by Iranian state media.

US officials claimed the reality was that Iranian forces had seized a Vietnamese-flagged oil tanker, the Southys, last month and two US navy ships, backed by air support, had monitored the situation, but did not try to interdict the vessel. One of the US destroyers involved was named as the USS The Sullivans.

The US said its forces watched Iranian forces “swarming, boarding and seizing the vessel and take it to Iranian waters.”

Provided the American account is factual, it is unclear why the Iranians would seek to board a vessel taking Iranian oil for export towards Asia clandestinely to avoid US sanctions. The Guardian reported some Iranian social media accounts as claiming Iran was seeking vengeance on the ship’s captain for previously cooperating with the US over covert Iranian oil exports.

The Iranian reports represented the IRGC as heroic. They may have been timed to coincide with the embassy seizure anniversary. The IRGC posted an eight-minute video showing masked Guards gunmen landing on the deck of a ship by helicopter as dramatic music played.

The JCPOA—signed six years ago by Iran, the US, UK, France, Germany, Russia and China—was drawn up to ensure Iran keeps its nuclear development progamme entirely civilian, with Tehran given a shield against major economic sanctions in return for compliance.

Former US President Donald Trump in May 2018 unilaterally took the US out of the multilateral deal, arguing it was not tight enough, and imposed swingeing sanctions on the Iranian economy. In response, Iran has committed serial breaches of the pact. For instance, it has enriched uranium to higher and higher purities.

Trump’s successor as US president, Joe Biden, wants to take Washington back into the JCPOA if Iran will agree to return to full compliance.

However, there are some hardliners in Iranian politics who would prefer to see Iran bin the JCPOA, in favour of building up trade with the east and developing nuclear knowhow free from the scrutiny of UN inspectors. They believe Iran can withstand US sanctions while doing so.

The restarted talks in the Austrian capital will be chaired by EU mediator Enrique Mora and will be attended by representatives of Britain, China, France, Germany, Russia and Iran, the EU’s European External Action Service said in a statement .

Iranian Deputy Foreign Minister Ali Bagheri, who serves as Tehran's chief negotiator, tweeted that the date was set in a phone call with Mora.

The US State Department said that US Special Envoy for Iran Robert Malley will lead the American delegation in Vienna and that Washington hopes Tehran returns to the talks ready to negotiate and in good faith.