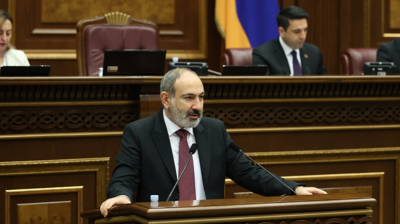 Armenian Prime Minister Nikol Pashinyan has suggested that Russian border posts be placed along the entirety of the Armenian-Azerbaijani border to secure its safe demarcation, with simmering tensions between the two South Caucasus nations threatening to boil over once more.

On July 28, three Armenian soldiers were killed in what was the deadliest clash between Armenia and Azerbaijan since the end of last autumn's Nagorno-Karabakh war. Clashes have become more frequent along the border since mid-May.

Speaking at a government session on July 29, Pashinyan also said that observers from the member states of the Russian-led Collective Security Treaty Organization (CSTO) could also monitor the border, adding that the Minsk Group of the Organization of Security and Cooperation in Europe (OSCE) and other formats could be acceptable alternatives to secure a peaceful border delimitation.

Internationally mediated negotiations involving the Minsk Group co-chaired by Russia, the US, and France have been unable to produce a lasting settlement of the conflict.

"As a member of the CSTO, Armenia, which will take over the chairmanship in the organisation in September, fully understands its responsibility to avoid threats to the CSTO's security and stay away from involving allies in armed conflicts, and I officially exclude any provocative actions from Armenia's armed forces," Pashinyan said. The CSTO groups Armenia, Russia, Belarus, Kazakhstan, Kyrgyzstan, and Tajikistan.

Kremlin spokesman Dmitry Peskov said in Moscow shortly after Pashinyan’s statement that "Russia continues contacting Yerevan and Baku to secure the implementation of the three-party agreements". The Russia-brokered agreements brought the 44-day war between Armenia and Azerbaijan to an end last November.

Fighting ended with Baku regaining control over parts of the breakaway region of Nagorno-Karabakh and all seven adjacent districts that were under ethnic Armenian control for almost 30 years. Under the ceasefire deal, around 2,000 Russian peacekeeper troops were deployed to in and around Nagorno-Karabakh to keep the peace.

US charges Iran operative with plotting to kill former Trump hawk John Bolton
48 minutes ago
Ukraine will receive $5.5bn in support from the US later this month
15 hours ago
John Malkovich to turn Skopje into Hollywood of the Balkans
15 hours ago
Envoy says start made on construction of Turkish attack drone factory in Ukraine
1 day ago
Huge explosion rocks Russian airbase on the Crimean peninsula
1 day ago