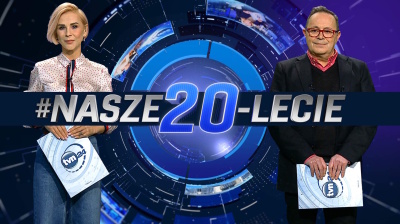 The Polish government's media bill seeks to ban non-EU entities from controlling Polish broadcasters, even indirectly, such as TVN. / TVN24
By Wojciech Kosc in Warsaw September 23, 2021

Poland’s government-controlled licensing body, the KRRiTV, renewed the broadcasting license of the US-owned and government-critical news broadcaster TVN24 on September 22.

TVN24 and its mother company TVN – both highly critical of the rightwing government coalition led by Law and Justice (PiS) – were targeted by the government via a media bill, which sought to ban non-EU entities from controlling Polish broadcasters, even indirectly.

That apparently has kept the licensing process on hold until now. But the divisive bill suffered a defeat in the opposition-held Senate earlier this month, however, and appears in doubt now.

Concurrently to renewing TVN24’s license, the regulator also asked the Constitutional Tribunal – which is a formally independent but in fact a government-controlled body – to see if the current licensing rules are in line with Poland’s constitutional order.

The government could use a tribunal ruling as a pretext to force the US owner of TVN and TVN24, the media conglomerate Discovery, to sell a controlling stake in the broadcasters.

TVN and TVN24 are owned by a Dutch-registered company, which is in turn 100% owned by Discovery.

“The news that TVN24 finally has been granted a license to operate in Poland is bittersweet. It proves that there was never any legitimate reason to deny or delay the license, which we applied for 19 months ago,” TVN said in an emailed statement, Reuters reported.

“However, the fact that the Polish media regulator, KRRIT, is using the resolution to challenge current media ownership rules is concerning and undermines the democratic legislative process itself,” TVN also said.

The row over TVN and TVN24 put Poland in a political conflict with the US, with Washington warning Warsaw that it was “deeply troubled” by the legislation.

The Polish government, led by Law and Justice (PiS), has a poor track record of transparency and adherence to the standards of the media. PiS has turned public media, the broadcaster TVP in particular, into extremely biased outlets.

Poland has slid down media freedom rankings in recent years under PiS. The World Press Freedom Index, which looks at 180 countries worldwide, ranks Poland 64th in its latest edition, down from 18th in 2015.

As Lukashenko met with Putin in Sochi, economic co-operation was certainly high on the "bilateral agenda." For Lukashenko, the most pressing matter is a new $1.5bn loan, which he doesn't seem to be getting.